Poke in the eye 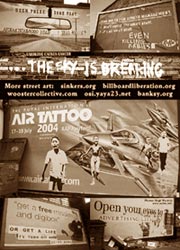 Corporate advertising overwhelms us with its garish ubiquity. It is time that such advertising was given a poke in the eye. Here is one: Subvertise! Exposing the Corporation organised by the uk-based watchdog Corporatewatch in collaboration with Action Aid, The Ecologist and Metrodome Film Distribution Company, uk. This exhibition opened simultaneouly in various cities in the uk showing posters featuring spoof adverts, subverted corporate logos, cartoons and billboards. The Russian designer Artle Bedev and campaign art groups such as San Francisco's Billboard Liberation Front and Canada's Adbusters are featured here .

The exhibition coincides with the release of the award-winning documentary The Corporation, in uk cinemas on October 29, 2004. This film explores the curious history, inner workings, controversial impacts and potential future of corporations. The film looks at how corporate culture, iconography and ideology penetrate all aspects of our lives. Chief executive officers of the world's largest corporations, whistleblowers, brokers, gurus and spies are all interviewed here.