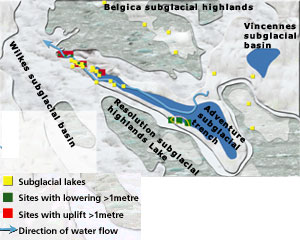 scientists have discovered rivers as large as the Thames flowing kilometres below the Antarctica ice shelf. The rivers were accidentally spotted by uk researchers examining data on the changes in thickness of the layer of surface ice. The chance discovery assumes significance because of global warming. Runaway melting of polar glaciers may lead to sea level rise and such underground rivers can quickly transport the melted ice.

Led by Duncan Wingham of the University College London, the scientists were examining data from the European Space Agency's ers -2 satellite, when they observed an abrupt fall in ice-surface elevation with a corresponding abrupt rise some 290 km away (see diagram). The scientists say the only possible explanation is that a large flow of water was transferred beneath the ice from one subglacial lake into others.

"Previously, it was thought that water moves underneath the ice by very slow seepage. But this new data shows that, every so often, the lakes beneath the ice pop off like champagne corks, releasing floods that travel very long distances," said Wingham. The study was published in the April 20 issue of Nature (Vol 440, No 7087). The finding suggests that water from deep within the ice's interior may have generated huge floods that reached the ocean in the past and may do so again.

The discovery would also mean reviewing of plans to drill deep to investigate subglacial lakes where ancient life is thought to exist. Beneath the thick Antarctic ice sheet lie hundreds of lakes, including the 14,000 square km Lake Vostok -- about four times the size of Goa. A major concern has been that drilling may introduce new microbes into the lakes. "Our data shows that any contamination will not be limited to one lake, but will over time extend down the length of the network of rivers," Wingham said.

The scientists liken the subglacial lakes to a set of beads connected by a string. For the most part, there is very little flow along the string. Then, pressure builds up in one lake till a flood occurs that fills the next 'bead' down the string, setting off a chain reaction.