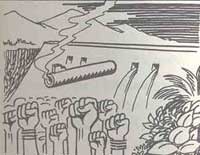 The recent death in police firing of 15-year-old Rahimat Punya Vasave, a tribal from Surung village in Dhule district in Maharashtra, created ripples of protest all the way to the Capital. Three other tribals were injured in the firing when villagers of Akrani taluk in Dhule district -- one of the strongholds of the Narmada Bachao Andolan (NBA) -- resisted district officials who were conducting a "survey". ***(Is Surung village in Akrani taluk?) The villages are expected to be submerged by the Narmada dam project.

The police again resorted to a lathi-charge when NBA leader Medha Patkar and about 400 anti-dam supporters protested the police firing outside the Dhule collectorate on November 22. Patkar and 169 others were arrested while on an indefinite dharna. Meanwhile, in New Delhi, a group of NBA activists held a protest meeting at Rajghat. Former environment minister Maneka Gandhi and social activist Swami Agnivesh were among those present.

The Dhule district administration is, however, unrepentant. According to news reports, the district collector claimed the tribals in Akrani were "encroachers", thus justifying their eviction. Counters NBA spokesperson Sanjay Sangvi, "The collector's claim is against the national policy on tribal matters, the International Labour Organisation declaration on development and displacement and the March 1993 resolution of the United Nations subcommission on human rights." In a letter to Union home minister S B Chavan, NBA's Sripad Dharmadhikari noted, "The government of Maharashtra is fully aware that its actions are morally, ethically and even legally unjustifiable. It knows that there is no land to resettle at least 1,700 families (whose land is) expected to be submerged."