Breaking past records, the city Atlanta was enveloped by a coat of pollen from the trees of northern Georgia 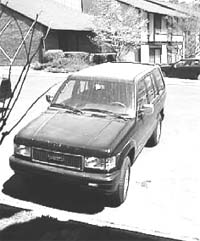 the city of Atlanta experienced a yellow deluge. Pollen, the male reproductive agent of plants from northern Georgia regularly poured over Atlanta with sticky mounds all over the city. The city was cleaned every evenings but the pollen was back the next morning. The city reached an all-time high of 6,013 grains per cubic meter, which is; virtually unimaginable considering that the national scales where a count of 120 is considered "very high".

The count was 33 percent higher than in any previously recorded spring in Atlanta, and far higher than any other city in the country, except for Tulsa, Oklahoma, which reported a count of 6,299. Michael Muilenberg, a Harvard University public health instructor who keeps the records for the National Pollen Bureau, said the highest count ever recorded was about 14,000 two years ago in Tulsa, which has a high concentration of extremely prolific mountain cedars. But he said the Atlanta count was quite impressive.

The sneeze count, naturally, is also off the charts. Margaret Higgins, a registered nurse at the Atlanta Allergy and Asthma Clinic, estimated that she sneezed 30 times in five minutes at one point during the weekend. "I made the mistake of eating outside on the patio," Higgins said. "An allergy sufferer cannot do that. I usually wear a mask and goggles when I go out, but it was so nice that I could not resist. Now I'm paying for it," she said. Thousands of patients at her clinic and others scattered around the area are also experiencing respiratory problems.

Allergy clinics are booked up three weeks in advance. Some pharmacies have experienced shortages of Claritin, Allegra or Benadryl, and regular users have been known to panic and plead with their druggists for refills. Biologists say it may be another product of the recent global weather phenomenon known as La Nina: a warm, dry winter, followed by an early spring and an unusual confluence of the germination cycles of several species of trees. The lack of rain recently and a wind strong enough to whip up a spectacular fire just outside downtown have also been blamed, but for most residents there are no satisfactory explanations. Though the most visible pollen, the fertility agent of pine trees, is said to be relatively harmless to breathers, it has its own form of pathology.

Last week, a combination of pollen and a light coating of drizzle was blamed for Slickening the pavement of Interstate 285, causing a pileup that damaged or destroyed 18 vehicles in DeKalb County, northeast of town. Many people do not even venture into their backyards. Electrostatic air filters have become popular, and television meteorologists are advising everyone to take frequent showers, wash their hands constantly, stay away from pets and avoid drying clothes outside. "I hate it, but there is nothing else to do," said Lee R Woodall, a designer with Kitchens of Atlanta whose eye water and chest contracts the moment she walks outside.

A good rain would rinse the air, but there has not been a good rain. "Just one good, solid rain, that's all we need," said Many Arow, a financial planner whose wife spent a couple of days in bed inhaling steroids and ingesting Zertac, an anti-allergen. Even for Atlanta, one of the most heavily forested cities in the country with an abundance of southern pine and oak trees, the numbers seemed a bit impossible. Several national experts said the count seemed unlikely, and questioned whether the Atlanta counting machine might be a little too close to a libidinous conifer.

But Kathleen Sheerin at the Atlanta Allergy and Asthma Clinic, which has kept the city's pollen counts for the last decade, said there was little doubt that the numbers were correct. "I was in Dallas and they were all excited because they had a count of 1,000. To me, it was like a breath of clean, crisp air", Sheerin said.