A warning about an oceanic problem 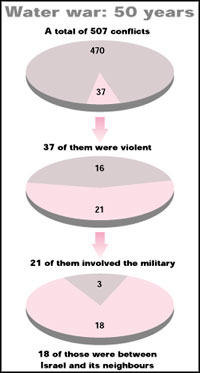 • Bad news: By 2050, 7 billion people in 60 countries may face water scarcity . Climate change is expected to contribute 20 per cent of the increasing scarcity globally

• Every day, 2 million tons of waste is poured into water, while 1 litre of waste water pollutes 8 litres of freshwater!

• There is a severe inequity in water distribution. A child in a developed country consumes 30 to 50 times more water than one in a developing country. Residents of Gaza Strip get only 52 m3 per person per year

• The poor pay more for water. In Delhi, poor people pay us $4.89/m3 to vendors, while richer households with municipal connections pay only us $0.01 for the same water

• Irrigation accounts for 70 per cent of total water withdrawal. Food security is the prime concern. By 2030, another 45 million hectares will be irrigated in the developing countries, increasing water demand by 14 per cent

• The millennium goal of halving the hungry by 2015 looks unachievable till 2030. Reduction of absolute number of undernourished people is very slow despite food production at historically low prices

• "Towards 2050, the world could enjoy access to food for all, ... , the fact that 815 million are presently ravaged by chronic undernourishment is not due to a lack of capacity to produce the required food, but to global and national social, economic and political contexts that permit, and sometimes cause, unacceptable levels of poverty to perpetuate."