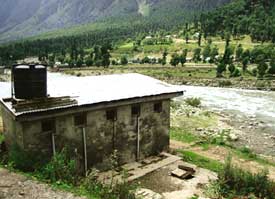 POLLUTION levels are rising in the Lidder river in Pahalgam, the base camp for pilgrims going up to the Amarnath cave (3,952 m) in Jammu and Kashmir.

An official report issued by the Jammu and Kashmir State Pollution Control Board (jkspcb) has raised concerns over the impact of pilgrimage on the local environment. According to the jkspcb report, besides other regulations, there needs to be a check on the inflow of pilgrims and their activities.
• Pilgrims and visitors to Pahalgam generate tonnes of waste every day

• Waste generated by domestic and commercial activities is often indiscriminately disposed.Unscientific management of such waste leads to serious environmental and health problems

• Dumping of garbage serves as breeding ground for vectors such as flies, mosquitoes, cockroaches and rats

• Chemical oxygen demand of the Lidder river is increasing at an alarming rate. Dissolved oxygen is declining, which may prove detrimental to the aquatic life

• Given the high altitude and taking into account vehicular emissions, the dispersion level of pollutants is low and smell of some gases is prominent

• Forest cover is under threat

• Sewage and night soil generated from hotels, camps and local residential areas is directly discharged into open drains which then flows into the Lidder river, thus polluting it
• Number of pilgrims needs to be restricted keeping in view the area's carrying capacity

• Use of polythene in and around Pahalgam should be prohibited

• Strict laws to be enforced for prohibiting pilgrims to use the Lidder river bank for toilet purposes.