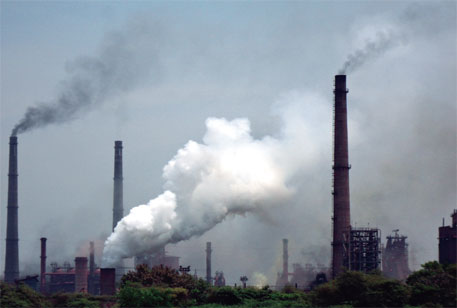 THE UNION Ministry of Environment and Forests (MoEF) has imposed a moratorium on setting up new industries or expanding existing ones in eight industrial clusters in the country after a Central Pollution Control Board (CPCB) survey showed high pollution levels in these areas. The clusters are: Vapi (Gujarat), Ghaziabad (Uttar Pradesh), Singrauli (Uttar Pradesh and Madhya Pradesh), Panipat (Haryana), Indore, (Madhya Pradesh), Ludhiana (Punjab), Jharsuguda (Odisha) and Patancheru-Ballaram (Andhra Pradesh).

In these areas, a moratorium was imposed earlier as well, in January 2010, but lifted by July 2011Ã”Ã‡Ãªon the basis of pollution control measures proposed by the concerned state pollution control boards (SPCB).

The ministry has also lifted its ban on developmental projects in 10 industrial clusters as the survey found a dip in pollution levels at these places. These are Bhiwadi (Rajasthan), Dhanbad (Jharkhand), Korba (Chhattisgarh), Manali (Tamil Nadu), Ahmedabad (Gujarat), Asansole (West Bengal), Haldia (West Bengal), Howrah (West Bengal), Visakhapatnam (Andhra Pradesh) and Kanpur (Uttar Pradesh). The Comprehensive Environmental Pollution Index (CEPI) score in these Critically Polluted Areas (CPAs) was found to be below 80 (on a scale of one to 100, 100 being most polluted) and has shown a decreasing trend compared to the score assessed by CPCB in 2011. P B Rastogi, director, MoEF, says, “We have lifted moratorium only in those clusters where improvements have been shown. This is not a one-time process, we will reassess every six months or year and then decide on the performance of the state action plans.”

The MoEF decisions are based on the revised CEPI scores assessed by CPCB from February to April this year. The CEPI score is a measure of pollution in industrial areas. CEPI was introduced in December 2009 based on which MoEF imposed a moratorium on any development project in 43 CPAs in January 2010. SPCBs were to prepare time-bound action plans during the moratorium period for improving environmental quality in the area. These plans were to be finalised by CPCB. The moratorium, initially imposed till August 2010, was extended by the ministry. Subsequently, SPCBs started submitting action plans, based on which the ministry lifted moratorium on 26 industrial clusters by July 2011.

According to the office memorandum of the ministry, “even after a period of two and a half years of implementation of action plans, there is no improvement in the environmental quality”. However, it is interesting to note that MoEF had lifted moratorium in these CPAs from October 2010 to July 2011 based on the action plans of the respective SPCBs.

The ministry order says that projects like highway, common effluent treatment and municipal solid waste project would be allowed in these CPAs. Modernisation of the existing industries in these areas would be allowed, but only if the pollution load does not increase, which will be certified by the SPCB and accepted by the Expert Appraisal Committee of MoEF.

The next review of these clusters will be carried out between December 2013 and February 2014.

There has been a lot of criticism earlier over the action plans submitted by SPCBs, based on which moratoriums were lifted. An analysis by Delhi non-profit Centre for Science and Environment (CSE) in 2011 showed that the projections in the Tamil Nadu Pollution Control Board’s mitigation action plan in Cuddalore were misleading. Similarly, in 2012, CSE highlighted that the action plan forÃ”Ã‡ÃªSingrauli did not take into account the mercury pollution in the area. CSE was also critical of the moratorium being lifted in Vapi and had found the action plan inadequate.

Chandra Bhushan, deputy director, CSE, says, “We are happy that for the first time in the country we have a system to identify areas as critically polluted, with the performance of the state action plans also being tracked. What is needed is better data collection, monitoring and analysis so that action can be taken quicker than in two-three years.”