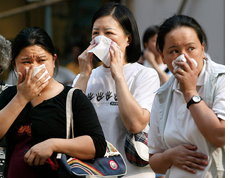 air pollution has become the most serious environmental problem for Hong Kong. It is not only affecting public health but also the city's ability to attract and retain foreign investments, an environment survey conducted by the us- based Nielsen Company on behalf of the American Chamber of Commerce has revealed recently.

Professionals interviewed during the survey suggest worsening air quality has led to an adverse impact on the economy of the city--world's leading commercial centre. The city is losing its charm to foreign investors, who, in the future, are likely to invest elsewhere.

Around 84 per cent of the respondents say air pollution is affecting their wellbeing, and they are thinking of leaving the city or have already left. Nearly 60 per cent find traffic congestion to be the growing concern.

Air pollution is also affecting companies, which are experiencing difficulties to recruit foreign executives in the city. While about 51 per cent of the companies are facing the problem, their number has increased by 12 per cent over the past year.

About 70 per cent of the professionals personally know people who consider the city as a hardship posting. Very few executives, only 19 per cent, are expecting improvements in the next 12 months.