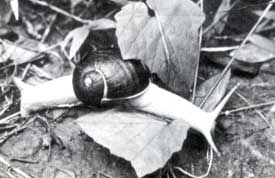 POET Samuel Taylor Coleridge's comment on water - abundant and yet unfit for drinking - is a reality in many parts of the globe. Contamination of water is a universal problem.Unplanned urbanisation and industrialisation are the main culprits responsible for polluting water sources in many countries. There are ways out of the mess, but most of these are expensive and slow. Recently, while looking for cheaper and quicker solutions, British researchers came across a solution that is not only cheap and fast, but also organic. It is mucus, a clear, viscous fluid that forms a protective barrier on the surfaces on the delicate skin-like layer called the mucous membrane. Mucous membranes are present mainly in the air-passages and the digestive tracts of all organisms, including humans.

The mucus secreted by freshwater snails and other aquatic life forms might help clean up aluminium pollution in rivers and lakes, says Jonathan Powell, chemist at St Thomas Hospital in London. The method, he says, might also work for other metal pollutants. br>
Acid rain is a major cause of aluminium pollution. It makes aluminium compounds soluble, leaching the ions out of rocks and soils into waters and watercourses. High concentrations of these ions can prove deadly. "Fish are dying in acid waters, but elevated levels are also toxic to other aquatic organisms, from algae and plants to birds," Powell says. He knew that mucus in the human intestine grabs toxic metal ions so that these can be excreted and wondered if mucus of other organisms does the same thing. He teamed up with experts on the freshwater snail Lymnaea stagnalis at the University of Manchester to see if the snail mucus also pulls metal ions out of water.

The team found that snails can significantly reduce aluminium levels in water. After 10 snails had spent 48 hours in a bucket of water with high levels of aluminium, its concentration fell by more than 80 per cent. Only a fraction of the lost aluminium ended up in the snails' bodies, the researchers said. The team believes the rest was bound to the mucus deposited in the bottom of the bucket and on its walls.

Snail mucus alone, which consists mainly of glycoproteins, also reduced aluminium concentrations. But bacteria and algae secrete far more mucus than snails, says Powell, so they could already play a key role in removing metal from rivers and lakes.

Keith White, one of the biologists at the University of Manchester, says aluminium could be removed from polluted waters by growing films of mucus on gravel that could be placed in water.

However, Charles Driscoll, environmental engineer at Syracuse University in New York, USA, says laboratory work might not reflect reality. "I think the environmental significance hinges on the relative contribution that these snails or other creatures that produce mucus would have in water bodies," he says.