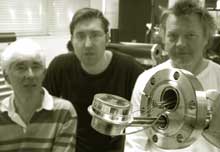 how about a nuclear reactor that you can carry around in your trousers' pocket? If the work done by a team of us scientists is any indication, this may soon be a reality. The scientists from the us -based University of California, Los Angeles (ucla) have developed a toaster-sized nuclear fusion device that works at room temperature to provide a steady supply of sub-atomic particles called neutrons.

The gadget comprises a tiny crystal of lithium tantalite housed in a chamber filled with deuterium gas (a form of hydrogen with an extra neutron). The crystal is first frozen to minus 33 c, then quickly heated to normal room temperature. This activates the crystal to generate an electric field of nearly 100,000 volts, which is enough to knock out electrons from the neighbouring deuterium atoms. These positively charged deuterium ions collide with other deuterium atoms in the chamber, leading to their fusing together to form helium gas that has two protons and one neutron (two in normal helium). A neutron and a considerable quantity of energy are let loose after each such fusion. Their observations showed that a maximum of 1,000 neutrons can be produced in a second by this method (Nature, April 28, Vol 434, No 7037).

The scientists said future experiments will focus on refining the technique for potential commercial uses such as portable neutron generators that could be used for oil well drilling or scanning luggage and cargo at airports. The technology also could give rise to implantable radiation sources, which could target cancer cells.