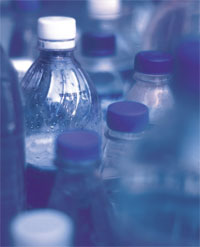 A new study by scientists at the Bhabha Atomic Research Centre (BARC) in Mumbai has revealed the presence of bromate in packaged drinking water in the city. Bromate is produced as a by-product when water containing bromide is treated with ozone.

Bromate is identified as a “possible carcinogen” by the World Health Organization’s (WHO’s) International Agency for Research on Cancer (IARC). While bromate is said to be mutagenic (an agent that causes mutation of genetic material), its potential carcinogenicity is still inconclusive.

The study was published in January 2015 in the journal Current Science by a team of scientists led by G G Pandit from the Environmental Monitoring and Assessment Section at BARC. They tested for disinfection by-products (DBPs), including bromate, in 18 different commercial brands of packaged drinking water obtained from local markets of Mumbai.

Bromate levels detected in the samples varied from below detection limit to 43 µg/l (micrograms per litre), with an average of 10.7 µg/l. Twenty-seven per cent of the samples contained bromate levels that were above 10 µg/l, the safe limit defined by the WHO. The Bureau of Indian Standards (BIS) does not provide any standards for bromate for packaged drinking water.

According to media reports, Coca Cola had recalled its bottled water in 2004 after the levels of bromate were found to exceed the prescribed standard of 10 µg/l in the UK. In a similar incident in the US, Wegmans Food Markets, Inc. withdrew all sizes of its Food You Feel Good About (FYFGA) Spring Water in 2006 when test results showed that bromate levels in some samples exceeded the 10 µg/l limit set by the US Food and Drug Administration.

India’s BIS, on the other hand, suggests methods such as filtration, activated carbon filtration and reverse osmosis (RO) for packaged drinking water, but makes no mention of DBPs. BIS standards for drinking water in general (such as tap water), 2012, include standards for some DBPs, but not for bromate. They only “suggest” referring to the WHO Guidelines for Drinking Water Quality, 3rd Edition, Volume 1, Recommendations, 2008, for a water safety approach which incorporates identification of risks.

The WHO guidelines identify methods that lead to the formation of bromate and include strategies for reducing the concentration of DBPs. One of these strategies recommends removing DBPs prior to distribution with methods like adsorption onto activated carbon. The BARC team’s study observed that samples of those brands which used activated carbon for adsorption contained very low levels of bromate.

The authors also estimated that the excess lifetime cancer risk due to continuous exposure to bromate was higher than the acceptable risk as per US Environmental Protection Agency (USEPA). They state that the result of their study further establishes the need for setting limits for bromate in India. An article published in 2011 by another group of scientists at BARC also revealed the presence of bromate in ozonated bottled water samples collected from different regions of India. These scientists concluded that the average exposure level of bromate was comparatively high and chemical toxicity was also presumed to be greater.

Anurag Tripathi, a scientist at the Indian Institute of Toxicological Research, Lucknow, said, “Since bromate has been declared as a possible carcinogen by IARC, all measures should be taken to remove it from packaged drinking water by the manufacturing company.” He also added that since WHO has already established guidance levels for bromate, the BIS should set its own standards without further delay.