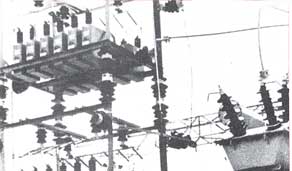 FOR decades the Indian power sector has been hounded by the scourge of mounting transmission and distribution losses, currently estimated at 23 per cent of the total power generated in the country, stalling efficient systems operation. But a solution might now be at hand.

The Power Finance Corp (PFC), the agency which finances power development and system improvement programmes for the power ministry, has drawn up an action plan on June 6, 1994, for the installation of capacitors by state electricity boards (SEBs). The action plan, based on a review of the capacitor installation programme held on April 15 1994, seeks to give a boost to the programme for the remainder of the Eighth Plan (1992-97).

At a recent workshop on Voltage Instability and System Collapse, held in Bangalore on August 9, Mata Prasad, advisor to Asea Brown Boveri (ABB) and formerly executive director with National Thermal Power Corp, said, "System collapses and voltage fluctuations have been a bane to the power system in India. This can be averted not only by adequate investment in generating capacity, but also by effectively managing reactive load at centres of high power demand."

Reactive loads result in reduced power transfer capability of the transmission line and reduced voltage. Capacitors minimise the reactive load and provide what is known as reactive compensation. With automatic control switches and equipment, capacitors are able to supply a constant power, irrespective of changes in system loads or in reactive power or voltage demand.

Says R K Nair, joint secretary in the ministry of power, "The ministry has been trying hard to come to grips with the problem of reducing transmission losses, since setting up additional capacity requires time and massive investments." Enormous quantities of power are wasted due to the transmission of reactive power from thermal plants to load centres located in urban areas. "Such losses could be minimised through the installation of high tension (HT) capacitors near high-load centres," says B M Pant, director, projects, PFC. The 20-odd manufacturers of HT capacitors, including Bharat Heavy Electricals Ltd (BHEL), ABB, Crompton Greaves, Sathna Cables, Mehar Capacitors and Katau Jankar, had been lobbying hard to get the power ministry to back the HT capacitor installation programme for which the technology and manufacturing capacity is available in the country. Says M Hanif, general manager of BHEL's transmission business group, which supplies over half the HT capacitors installed in the country, "A task force set up by the Central Electricity Authority (CEA) had first initiated a national programme in 1990 to install about 3,000 HT capacitors. But it was only in 1994 that the power ministry announced a significant financial package which could give a boost to the programme." PFC is spearheading a programme to install 14,500 high tension capacitors by March 1997, at a total cost of Rs 650 crore.

Says Krishna Swarup, former CEA chairperson and now chief consultant of PFC, "PFC would make available Rs 310 crore of the Rs 650 crore required for the capacitor installation programme. The rest would be mobilised by the SEBs." The loan is linked to repayment of dues accrued by the state government to SEBs. By this criterion, only Rajasthan, Andhra Pradesh, Karnataka, Tamil Nadu, Orissa, Gujarat, Maharashtra, Madhya Pradesh and Goa qualify for PFC funding.

Although Kerala does not qualify for PFC support, it was the first state in India to install a series capacitor on the Idukki-Kozhikode 220 kv (kilovolt) power transmission line. The capacitor, installed in May 1984, has increased power transmission capability of the board by 35 per cent. The capacitors also reduced system losses by about 10 mw over the past decade. Says P Unnikrishnan, executive engineer of the Kerala SEB transmission division in Kozhikode, "The performance of the capacitors has been exceptionally good."