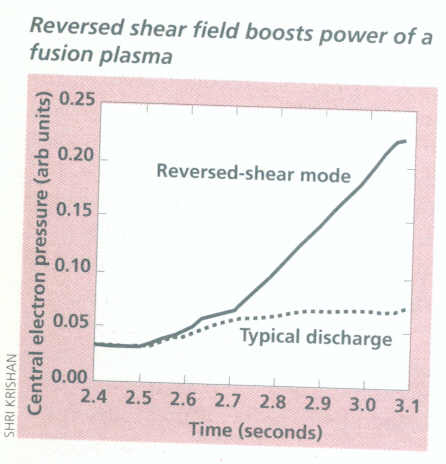 POWER generation using fusion reactors has long been seen as the panacea for humankind's unquenchable thirst for energy. If feasible, fusion will not only be economical but also one of the cleanest sources of power. There is only one snag: we are still many years from building an operational fusion reactor (Science, Vol 269).

The problems are daunting. The technology of fusion relies fundamentally on using hot plasma, a state of matter which is basically a highly ionized substance at an extremely high temperature. In these extreme conditions, the atoms are stripped of their electrons and exist freely along with the nuclei.

The problem has been that instabilities develop in the plasma which allow the particles to leak out and thus reduce the efficiency of the tokomak. Now 2 groups of American scientists - at Princeton University's Tokomak Fusion Test Reactor (TFTR) and the D D tokomak at General Atomics, San Diego - have reported a breakthrough in containing plasma for a longer time, by controlling the plasma instabilities appreciably.

Using very finely tuned magnetic fields, they claim to have increased the central density of the plasma (a crucial factor in determining the power output) 3-fold and reduced the particle leakage by 50 times. This is an extremely significant step towards reducing the size and cost of a working fusion reactor by about 50 per cent.

The researchers are cadleious about their results, insisting that they have only managed to reduce the instabilities in a limited range of parameters and that the new results need to be supplemented by experiments on the TFTR. This could, however, prove to be a major breakthrough in the quest for cheaper and cleaner power.