Women face the brunt of globalisation and trade 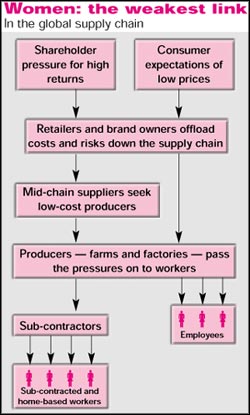 • Globalisation has drawn millions of women into paid employment across developing countries, but they are denied their fair share of benefits, says Oxfam gb's latest research in 12 countries

• Women are working at high speed for low wages in unhealthy conditions. They are forced to put in long hours. Most have no sick leave or maternity leave; few are enrolled in health or employment schemes

• The chief reason: the new business model known as the global supply chain. Globalisation has opened up countries, creating producers from whom brand multinational companies can source their raw materials and products

• International mergers and aggressive marketing pricing have concentrated market power in a few hands. Out sourcing has become common. Retailers push the costs and risks down the supply chain to factory/farm managers, who further pass them down to the weakest link in the chain: women workers

• In Chile, 75 per cent women in the agricultural sector are hired on temporary contracts for picking fruit.
• In China's Guangdong province, women face 150 hours of monthly overtime in garment factories, but 60 per cent have no written contract and 90 per cent have no access to social security

• Retailers, on the other hand, are doing brisk business. Wal-Mart, the world's biggest retailer, buys products from 65,000 suppliers and sells through 1,300 stores in 10 countries. No wonder its products are 14 per cent cheaper than its competitors