With the help of nickel and vitreous carbon, the industrial manufacture of diamonds becomes easier 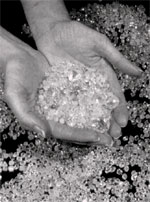 diamond - the hardest natural substance known and one of the two crystalline forms of carbon -- has a variety of uses in industry. Since the first synthesis of diamond in the laboratory in 1956 by F P Bundy and others in 1956, there have been many attempts for producing diamonds in the laboratory. Now Xing-Zhong Zhao and collaborators of the Pennsylvania State University, us, have reported hydrothermal growth of diamond in the presence of nickel and vitreous carbon.

In industry and in nature, diamond can be made under conditions of high temperature and pressure. The pressure required is about 120 kilobars (one kilobar is one atmosphere) and a temperature of about 2000 c. At a somewhat lower temperature and pressure (50 kilobars and 1500 c), diamonds are made indirectly through the solution of carbon in iron and nickel.This is the process by which small industrial diamond grains are made. Another process, which was first demonstrated in the early eighties, is the chemical vapour deposition technique. In this, a temperature of less than a 1000 c and a pressure of about one atmosphere is sufficient for the growth of diamond films.

But what Zhao and his collaborators have done is to produce diamonds at less extreme conditions. They have used a mixture of 95 per cent glassy carbon, two per cent diamond seeds (each smaller than one micrometre) and three per cent nickel with water at temperatures of 800 c and pressure of about 1.4 kilobars. After about 50 hours of reaction, the powder recovered was analysed. Using electron microscopy, x -ray analysis and Raman spectroscopy, they concluded that they have produced diamond crystals that are tens of micrometres in size. Though they have not been able to produce the diamonds in the absence of seeds, they are reasonably sure that the grains that they observed at the end of the reaction are indeed new and not the original diamond seeds used.

The importance of this discovery is that it is for the first time that diamonds have been grown under hydrothermal conditions. These are the conditions that are essentially similar to those that produce diamonds in the earth.