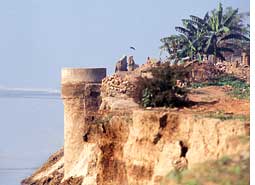 New method takes into account turbulence in flow of water

ABOUT a hundred thousand farmers in Malda and Murshidabad districts of West Bengal lose land and homes to erosion caused by the Ganga every year. With little knowhow on when the river will wash away their farmland, they are compelled to keep a watchful eye on the river during monsoon.

Predicting soil erosion is not easy. Wind and water have long been known to cause soil erosion. Scientists and engineers have tried to predict the natural phenomenon using average force of water flow for the past 72 years, but the results have been inaccurate. Accurate prediction could help in taking effective protective measures like checking the flow of the river, construction of embankments, protection of the bed or simply shifting people from a vulnerable place.

To do away with the errors, researchers from the Virginia Tech College of Engineering in the us came up with a method for accurate prediction of erosion and its scale. After considering several factors in the study, they zeroed in on turbulence or gusts which is a measure of the ups and down in velocity of any naturally flowing fluid, as an important factor behind erosion.

No naturally flowing fluid moves with a constant velocity. "The present system for determining erosion potential in a flow only measures a single, time-averaged value. It does not account for the gusts or their duration," said Panayiotis Diplas, lead author of the study published in the October 31 issue of Science. Scientists and engineers have long suspected this phenomenon to be responsible for eroding river banks, he said, but mere hypothesis was not enough to factor this into equations. "We needed to develop a method that accounts for the role of turbulence on soil erosion in a quantitative way," he added.


The group studied the influence of turbulence in an artificial water system built inside the tech college and found that all turbulences created were not equal. They used a model made of a metal ball (magnetic) slightly nested among teflon balls (non magnetic) and introduced electromagnetic pulses of known magnitude and of different durations. These balls represented soil particles in a river bank. The magnetic field simulated the turbulences of water in a river. When the electromagnet was activated, it affected only the top, metal ball. This represented the case of the topmost mobile particle located at the bottom of a river, fully exposed to the hydrodynamic forces. The scientists found that, in addition to velocity, the duration of the gusts also caused the metal ball to dislodge or erode from its resting location.

Using variations in electromagnetic energy, the team was able to list turbulences of different magnitudes and duration that resulted in soil particle dislodgement.

Next, the team tried to prove this hypothesis in a two-feet-wide, 65-feet-long artificial water body, which simulated natural streams. A half-inch diameter ball was slightly nested on a bed of immobile pebbles. The water was allowed to move with the typical random turbulence found in such streams and its speed was measured. Laser beams shining through the artificial stream from outside recorded when the ball moved. Thus the exact condition and duration of the gusts that caused erosion were captured. The results agreed with the findings of the electromagnetic study, the research reported.

B S Majumdar of Indian Statistical Institute, Kolkata, welcomed the study. However, some experts said its application might not suit Indian rivers like the Ganga. "The flow is complicated since it varies in different reaches in each river, where banks are largely unprotected and the soil is alluvial," said a hydraulic engineer working on the Ganga. "In any case, erosion prevention entails tinkering with nature and our capability to do that is limited." Moreover, funds allocated for such research are minuscule. "In Malda, for example, authorities have protected the bed by adding bamboo shavings, jute textiles and rocks on it, but that has not prevented erosion," he added.