Redknot sandpipers use their pressure sensors to prey on buried clams 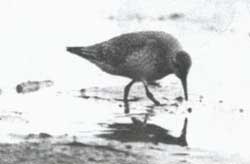 SHORE birds usually find prey by probing until they strike a clam or a crab. Some can even feel vibrations from buried animals with their bills. But now, researchers in the Netherlands have found one specie which takes advantage of the properties of wet sand to find deeply buried, motionless molluscs. Redknot sandpipers can sense variations in the patterns of pressure. in the sediment created by the proving of their bills.

Theunis Piersma of the Netherlands Institute for Sea Research on the island of Texel noticed that redknot sandpipers, Calidris canutus, catch more buried molluscs than they should if they were simply probing the sediment at random. But these molluscs do not move very much and so are unlikely to produce vibrations the birds can detect.

To find out how the birds found their prey, Piersma and his colleagues trained several redknots to distinguish between buckets containing objects buried in wet sand and those containing only wet sand. If the bucket had a clam, the bird could collect food pellets from a feeder on the right. If a bucket only contained sand, the bird would have to go to the left-hand feeder to get its reward.

After training the birds, the researchers could tell whether a bird had detected a buried object by which feeder it visited first. The researchers placed the birds in a dark room that had a bucket of wet sand with or without a clam just under the surface, then illuminated the bucket for 15 seconds. When the light over the sand went out, a second light came on over two feeding stations, distracting the birds from the bucket, as well as the clam if they found one.

The redknots could easily distinguish buckets with shallow clam from those without any clams. But when Piersma buried the clam beyond the reach of the bird's bill, it could still detect it and work out which feeder had food. The birds could also recognise buckets containing clam-shaped stones instead of actual clams, which means they did not need to rely on vibrations or chemical cues from the clams (Proceedings of the Royal Society Series B, Vol 265, p 1377).

A redknot's bill contains sensory structures known as Herbst corpuscles, which may act as tiny pressure gauges. As a bill penetrates wet sand, it generates pressure in the trapped water. Any solid object buried nearby produces a slight back pressure against the bill. Piersma proposes that the Herbst corpuscles detect these tiny pressure build-ups.

The birds may also amplify the effect by "pumping" their bills into the sediment several times per second. This shakes the sand grains down so that they pack more densely, says Piersma, thus enhancing the pressure signal from the buried prey.