‘Private helipads, a must for Mumbai’

They will improve response to terror attacks: Maharashtra government 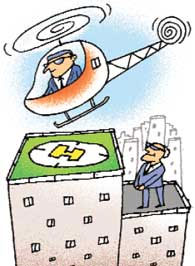 The Maharashtra government would like people to believe that private helipads in Mumbai will serve the nation’s interest. The guidelines allowing private helipads atop buildings are awaiting clearance of the Union environment ministry that has to decide whether they adhere to noise regulations.

Officials in the urban development departments that framed the guidelines said commandos found it difficult to reach the sites under terror attack in November 2008 because of traffic congestion; helipads would help mobilize forces better in future. But activists said the guidelines would help only industrialists (see ‘Din over private helipads in Mumbai’, Down To Earth, September 1-15, 2009). Instead of helping security forces, the helipads will render the city vulnerable to air attacks, said Sumaira Abdulali of non-profit Awaaz Foundation. The activists along with 200 residents have shot off a letter to the Union environment minister Jairam Ramesh asking him to reject the guidelines.


Abdulali said the rooftop helipads will not be monitored as the guidelines prescribe self regulation by owners (see box). Chief commanding officer of the western naval command, Sanjeev Bhasin, had also criticized the construction of private helipads last month at the annual Navy week celebrations. “They can be used by anti-nationals to land in the city and create mayhem,” he said.

Activists said the helipads would increase noise pollution in the city. A recent study by the state pollution control board showed helicopters would generate 120 dB noise level against the prescribed norm of 55 dB for residential areas. The guidelines are silent on how this noise will be controlled.