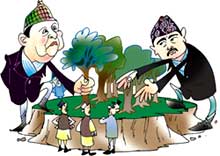 on New Year's Day 2006, King Gyanendra of Nepal quietly issued an ordinance that many environmentalists fear could prove a major setback to this Himalayan kingdom's efforts over the last decade to restore people's rights over their natural resources.

Made public last month, the ordinance is ostensibly aimed at amending the National Park and Wildlife Conservation Act, 1973, to allow for private management of Nepal's national parks and conservation areas. But a clause in the amendment that stipulates only organisations devoted to nature conservation and registered in Nepal can bid for contracts, narrows the number of outfits that can apply to just one -- the King Mahendra Trust for Nature Conservation (kmtnc).

Civil society groups in Nepal that have largely kept mum about the development, privately call the ordinance the Regent's New Year gift to his son. King Gyanendra is the trust's patron and Crown Prince Paras, its chairman.

kmtnc is already managing the Manaslu and Annapurna conservation areas and has shown interest in taking over management of the Rara and Shivapuri national parks. Now there's speculation that the government might hand over resource-rich national parks like Chitawan and Sagarmata to the trust too. "It is clear that kmtnc wants to manage national parks that make a profit," says a local conservation expert.

The ordinance also seems to restrict people's participation in the management of protected areas. "This is against the public trust doctrine," says community forest rights activist Dil Raj Khanal. The state had acquired private land to protect biodiversity. They have displaced thousands of people in the name of conservation. Now the government wants to hand over the land to a private organisation. Is this justice?" Khanal said of the new law that could change Nepal's image as a country that's pro-people conservation.

National parks and wildlife reserves in Nepal occupy about 19 per cent of the country's area (the world average is 6 per cent). In the 1990s, Nepal's democratic government put in place legislations that helped give people rights over their local resources. The country's 1993 Forest Act, led to the growth of community forest management in the country, and is seen as one of the most progressive resource management regulations in the world. The Act made it mandatory that 30 to 50 per cent of the income of conservation areas be spent on development of communities living within the buffer zone.

This new (fifth) amendment, however, doesn't specify whether the private managers will have to share their profits with local communities. "The law is not clear on that provision, this means the new managers will be able to bypass the provision," says Ravi Sharma Arlyal, a wildlife law expert. The amendment has scrapped an earlier provision wherein local communities were consulted and they coordinated in welfare projects before implementation.

The council of ministers, of which the King is chair, passed the ordinance without any consultations or public discussions. The amendment was apparently made in line with the government's 2003 policy to 'privatise' the management of national parks and wildlife reserves. The same year, the ministry of forest and soil conservation issued a 'letter of intent' to study the feasibility of handing over management to private organisations. But the earlier policy, put in place without consulting all the stakeholders, gave equal access to all ngos devoted to nature conservation.

Government officials say handing over the national parks' management to private organisations will make operations efficient and economical by cutting back on employees. The government will have the responsibility of 'monitoring' only the private organisations' work in managing these protected areas. However, the amendment doesn't clarify who will provide security to the parks and conservation areas. Currently, the Nepalese Army does the job, which, the local media claims uses 80 per cent of the national budget.

On one hand, the fifth amendment to the Act will help the National Parks' management become more transparent and on the other, private organisations may not be able to control poaching and illegal trade of wildlife parts, says Arlyal.