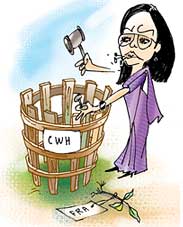 rajya Sabha recently accepted a breach of privilege motion against union environment and forest secretary Meena Gupta. The motion was moved in November 2007 by Rajya Sabha member and cpi (m) leader, Brinda Karat, "against the arbitrary manner in which the Union Ministry of Environment and Forests (moef) was going ahead with the identification of Critical Wildlife Habitats and Critical Tiger Habitats".

If the privilege committee of the House finds the charges valid, Gupta will face punishment. In October 2007, moef asked chief secretaries of states and union territories to notify the critical wildlife habitats under the forest rights act (fra) notified in January 2008. Karat said moef did not have the right to implement any portion of the law before it was notified and said implementing the act in parts is "against the spirit of the act".

She said the ministry bypassed the scientific process mentioned in the forest rights act while identifying the critical habitats. The act says no forest dwelling communities should be resettled unless it has been scientifically proved that their activities damage wildlife. Authorities should seek the consent of the forest communities before taking any such action. But Karat alleges the ministry did not follow this. "Even the critical tiger habitats were not notified scientifically," she said.

Karat also alleged the wildlife lobby delayed the notification of fra since "they wanted all the protected areas to be declared as critical habitats".

However, sources in moef said that the General Clauses Act of 1897 enables the ministry to issue the guidelines in advance of the notification of fra. The act empowers the government to draw strategies, such as issuing guidelines, under certain provisions of an act even before it is notified.