Draft amendments to the Forest Conservation Act rules, however, do not make gram sabha consent mandatory for all projects 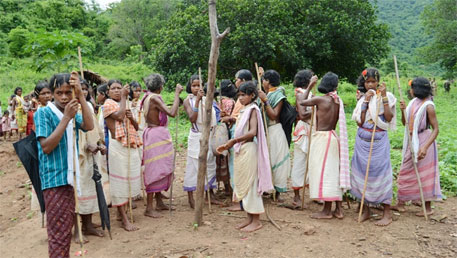 The Union Ministry of Environment and Forests (MoEF) is planning to make it legally binding for the states to settle tribal rights over forestland before they send to it proposals for diverting such land for industrial use. It, however, seems to be leaving a window open for itself to decide whether the gram sabha consent will be required for a particular project or not. It may be recalled that Vedanta’s proposal to mine bauxite from Niyamgiri hills could be stalled only after the Supreme Court ordered that the fate of the project should be decided by the gram sabhas of the Dongria Kondhs.

The ministry is planning to amend the rules of the Forest Conservation Act (FCA), 1980 that govern the diversion of forestland for non forest purposes. One of the major changes that the ministry is planning in the new rules is to align the process of forest diversion with the provisions of the Forest Rights Act (FRA) of 2006 that recognise traditional rights of forest dwellers over forestland.

FCA to be aligned with FRA

FRA mandates that forest dwellers cannot be shifted from forestland unless their traditional rights over such land are recognised. For long, large tracts of forests have been diverted in the country for mining and industrial projects, without caring much for the rights of tribals and other forest dwellers who depend on forests. In 2009, MoEF issued an executive order making it mandatory for all the projects which require forestland diversion to obtain consent of the affected gram sabhas, including certificates from them that FRA has been implemented in the region.

The order has, however, been repeatedly flouted by the states and at times by MoEF itself. Big-ticket projects like Vedanta and Posco in Odisha have got into legal hurdles for disrespecting the rights of the forest dwellers. While MoEF's order was considered to be an executive decision which did not have the backing of a law, there was no prescribed procedure for state governments to ensure time-bound implementation of FRA in the forest areas proposed to be diverted.

The new FCA rules, still at a draft stage, are expected to fill this gap. The draft rules circulated among the ministry officials earlier this year proposes that after the forest diversion proposal is forwarded by the divisional forest officer to the conservator of forest within the state government, the district collector will complete the process for settlement of rights under FRA and obtain consent of the gram sabhas “wherever required” and forward his findings to the conservator of forests within two months. Only after this requirement is met, the proposal will be processed at the state and Central level.

One tricky point, however, still seems to be unresolved. The draft rules mandate the consent of gram sabhas “wherever required”. While the 2009 order of the MoEF mandated the consent of the gram sabhas in all the cases; the ministry later tried to dilute it several times.

In February this year, forest diversion for linear projects, such as roads, electricity lines were exempted from the requirement of obtaining gram sabha consent. In an affidavit filed in the Supreme Court in the Niyamgiri mining case on February 15, the ministry said such consent will be required only in cases where “displacement of large number of people” is involved and which “affect the quality of life of the people”. This stand of the ministry was criticised by forest rights activists who feared that ministry may use these exceptions to dictate where the forest dwellers will have the say in vetoing the project and where they will not. The draft rules do not specify which projects will require gram sabha consent and which of them will not.

A senior official in the ministry confirmed that the provisions of the new rules deal with FRA but refused to comment on the matter of gram sabha consent. The ministry is soon going to send the draft rules to the ministry of law and justice for its inputs after which it will place them in the public domain for public comments.

The draft rules also aim to provide time lines to give more time to both states and the Centre to process forest clearance projects. The Forest Conservation Rules 2003, that are currently in force, mandate that states examine and recommend fresh forest clearance proposals to MoEF within three months of the receipt of the proposal from the proponents and for the MoEF to dispose it within 60 days. These deadlines are hardly met and the ministry has often faced flak from industry and some politicians for delaying key infrastructure projects.

The draft rules propose varying and tiered time lines for projects depending on the requirement of forestland. For instance, for the project requiring up to five ha of forestland, the proposed time limit to dispose it is 120 days while for projects involving forestland diversion of over 100 ha, the current 150 days time limit is being extended to a maximum of 300 days. The deadlines are fixed at each official level and penalties are also prescribed in case of delays.


Draft policy on inspection, verification, monitoring and the overall procedure relating to the grant of forest clearances and identification of forests

Details of Proposals Seeking Prior Approval of Central Government Under the Forest (Conservation) Act, 1980 for Diversion of Forest Land Pending Before the Government of India