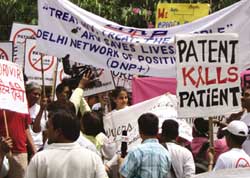 A patent application for a key aids drug in India recently provoked a written protest to the Delhi patent office on May 9, 2006, by the Indian Network for People Living with hiv/aids and the Delhi Network of Positive People. It was followed by a protest march the next day in Delhi.

Gilead Sciences had submitted a patent application for tenofovir disoproxil fumarate (tdf), a key aids drug, at the patent office in Delhi in 1998. With the Indian Patents Act 1970 being amended last year, the patent office has started examining thousands of patent application. The amendment constrains the production of generic versions of patented drugs through reverse engineering but also opens the possibility of raising objections against a patent before it is granted.

A generic version of tdf is already being marketed in India and if Gilead were granted the patent, its production will be blocked until 2018. The protest ing groups claim Gilead's drug was not new thus it didn't deserve a patent.
Drugs Patents India AIDS News Briefs US Russia Economy Space Technology Science & Technology
Donate Now