Public holiday with a difference 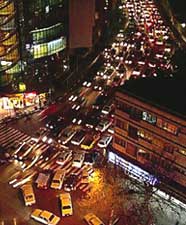 Increasing air pollution in the Iranian capital Tehran, forced its government to announce a two-day holiday in an attempt to reduce traffic on the city's streets. An official tv broadcast urged people not to drive to work but use public transport, since air pollution had reached dangerous levels. The authorities also asked residents especially children and elders, to stay at home if possible or wear face masks when venturing outdoors, to reduce health risks. Few days back, smog had reached a critical level with the sun barely visible.

More than 1,600 people have already been hospitalised with increased cases of heart attacks and breathing problems. An estimated 5,000 people die every year from air pollution in the city. The authorities blame the three million cars in Tehran, which are more than 20 years old and lack modern exhaust system. Mountains surrounding Tehran too add to the problem by trapping the dirty air over the city