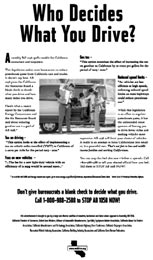 The Auto lobby in California launched an expensive campaign against the proposed Assembly Bill to introduce tax on cars, restrict mileage, fuel use and speed limit of vehicles in their effort to clean up the air and reduce greenhouse gases.

The campaign pitched the right to pollute as a freedom of choice, dubbing the proposed bill as an effort to snatch cars away from people. Print and radio advertisements urged people to call up politicians and lodge their protest. But it did not work. California assembly passed the law on September 22, the first legislation to link automobile pollution with global warming.
REVIEWS Reviews India Health Pil Legislation Air Pollution Control California California Vehicles Media
SUPPORT US