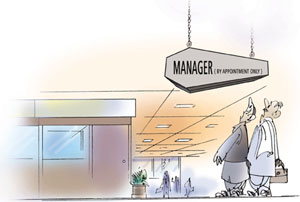 public sector banks have long been chastised as the black sheep of the financial sector. But while a lot of experts might deride these institutions for their non-performing assets and lower productivity, at the end of the day, public sector banks have far happier customers compared to their counterparts in the private sector. According to Reserve Bank of India's (RBI's) latest report, Trend and Progress of Banking in India, public sector banks rule the roost in customer satisfaction.

The report should make those singing hosannas for private sector banks sit up. It shows that the State Bank of India (SBI) recorded 0.1 "complaints per branch" while the corresponding figure for icici was 1.39--more than 10 times that of sbi. Citibank fared far worse it recorded a whopping 8.59 complaints per branch.These complaints were made to rbi's grievance cell.

One, however, needs to look at another aspect before delivering the final verdict profits per branch. Here, private banks fare better. For example, on an average, a Citibank branch earns a net profit of Rs 18 crore annually. An average icici bank branch earns Rs 4.5 crore, while an average sbi branch earns just Rs 50 lakh, annually. The standard response to such figures is that private sector banks are more efficient than their public sector counterparts with foreign banks taking efficiency to astronomical levels.

But their rich rake-offs notwithstanding, the profit-complaint ratio of private sector banks is much lower than their much maligned public sector counterparts (see graphs Public sectors bankable, Downside of efficiency). sbi's profit-complaint ratio of 4.1 for example is much higher than icici and Citibank.
rbi's data indicates that private and foreign banks are biting off more than they can chew customer acquisition is shooting through the roof but the servicing mechanism is given short shrift.

Banks, like all other businesses, believe that "time is money". The private sector interpretation of this adage seems to be spending as little time on the customer as possible. In most private banks, the time spent on the phone with a customer is tracked and executives found to be spending an inordinate amount are ticked off. The zeal to be efficient means that the private sector has all but forgotten another business aphorism time spent with a customer is an investment which may yield future dividends in the form of customer loyalty and referrals. And their surveys, other than those conducted by rbi, testify to such omission. For example, according to a survey by Consumer Voice (http//www.consumer-voice.org), a consumer awareness magazine, people were more likely to recommend public sector banks to their friends or relatives. Of the top five banks in this category, three belong to the public sector. The highest-ranking foreign bank is Standard Chartered at number eight. icici Bank is at number 15 (fifth from the bottom), with Citibank bringing up the rear.
Recent advertising campaigns, especially by private banks, have increasingly started using the emotional platform to attract customers. With tag lines such as "Hum hain naa" and "Just like borrowing from a friend", these banks attempt to bring home the fact that the bond between a customer and his bank goes beyond the purely commercial.

However, customers don't necessarily share that warm feeling.According to the rbi report, private and foreign banks actually score pretty high on customer complaints of the nasty variety namely, "harassment in recovery of loans". Foreign banks record 0.134 such complaints per branch--more than 30 times the overall average. The corresponding numbers for new private Indian banks is 0.021 and 0.003 for public sector banks.

The Consumer Voice survey also has private sector banks faring poorly in this respect. Only one public sector bank figures amongst the top five in the list of banks with highest number of disgruntled customers. Not surprisingly, Citibank tops the list.

Citibank also tops another dubious list that of people fed up with tele-marketing executives pestering them. The bank accounts for 40 per cent of all such complaints.


At Citibank's website, one finds a complaint form along with a detailed note elaborating the grievance redressal system. The icici Bank home page also has a similar link, prominently displayed.

The sbi home page does not have a link relating to complaints. What they do have is a customer care web page that declares, "Customers of the bank can meet senior executives of the bank on the 15th of every month (between 3.00 pm and 5.00 pm) without any prior appointment and discuss issues relating to their accounts/banking transactions. In case the 15th is a holiday, customers can meet the next working day."

It is a fundamentally different approach. For the new breed of private banks, human contact is anathema. The overarching desire is to resolve grievances on the phone or through the Internet. The customer is preferred to remain a faceless entity with a number to identify him. But at a public sector bank, a harried customer, running from pillar to post would often find that a kind word, a cup of tea and a patient hearing solves half the problem.

According to sociologist Devika Bordia, there may be cultural factors involved. In India, personalised banking was a way of life. Says Bordia, "Ideally, people would visit the village mahajan or munshi to deposit their money and valuables for safekeeping. He, in turn, would patiently explain the entire transaction, elaborating the byaj (interest rate) and other details. The banker and his customer shared an emotional bond that went beyond the mechanics of operating a bank account." The foreign banks have failed to recognise this and private sector banks are now aping them.


One reason for disgruntled customers is the fact that that the service executives are often not authorised to solve problems and refers them to another party. This often leads to a chain reaction and such vacillation irks customers, leaving them with no choice but to approach rbi. According to P Shimrah, secretary to the banking ombudsman, rbi (see box The last resort), "Public sector banks are decentralised. The branch manager of a public sector bank is more empowered than his private sector counterpart to solve problems at his level. In private sector banks, it's the opposite. With a centralised decision making authority, they feel that technology can be used to overcome these problems."

But technology, like atm machines, though useful, cannot provide complete solution. For two important reasons. Firstly, technology is not infallible it solves old problems but creates its own new ones. Secondly, technology needs to find favour with the public. Inappropriate technology or innovations that are too far ahead of their time will not work. Instead of living with the vision of a future utopia with perfect banking systems, it would be wiser to accept the problems that are cropping up now and address them in a sensible and humane manner.

The fact that public sector banks need to shape up has been repeated ad nauseam, but the solution does not lie in swinging to the other extreme typified by foreign banks. A satisfying middle ground needs to be found where the cutting edge efficiency of western banking is tempered with respect and empathy for the customer.