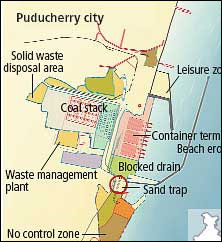 The union home ministry has found several irregularities that point to corruption in the contract for redeveloping Puducherry port. On December 8, the ministry filed an appeal in the Supreme Court, saying the transfer of 62 hectares (ha) of land from the Puducherry port department to the developer for expanding the fair-weather port into a deep-water one was illegal. The ministry asked the apex court to make it a party in the port case.

The apex court had earlier rejected an appeal to scrap the port project against which the petitioner, Villianur Iyarkkai Padukappu Maiyam, an environmental group, filed a review appeal seeking recall of the order. Puducherry is a Union territory and all such projects need prior approval of the central government, the ministry affidavit said.

Earlier this year, the ministry had conducted a special audit of the project when the Puducherry government sought approval for the land transfer.


The audit team found several irregularities in awarding the project: no tenders were called; the financial status and work experience of the bidder were not considered; the bids were not evaluated technically or financially as in the case of all large projects.

The auditors concluded the concession agreement between the developer, Subhash Project Marketing Limited (spml), and Puducherry government did not serve the interest of either the Centre or the Union territory (see box).

The ministry had also received reports from the Planning Commission and the Union finance ministry about corruption in the bidding process.

Citing these facts, the ministry has requested the Supreme Court to reconsider the appeal filed by the petitioner (see ‘Harbouring doubts’, Down To Earth, May 15, 2007).

The organization had at first petitioned the Madras High Court in 2006, to quash the orders awarding the project to spml.  The high court rejected the appeal; its decision was upheld by the Supreme Court on May 14, 2009 .The environmental group filed a review appeal in which the home ministry now wants to be made a party.

“spml  was not among the companies shortlisted for the project. The company circumvented the bidding process and was awarded contract just on the basis of a presentation it made,” said Probir Banerjee of the non-profit, Pondy can.  He said the detailed project report even mentioned construction of hotels and tourism infrastructure, which were scrapped by the high court.