Pulling a fast one 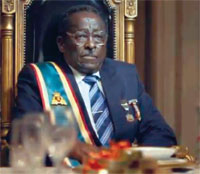 Nando’s South Africa said threats from a youth group forced it to axe the video showing a sad Mugabe look-alike dining alone at a table set for Libya’s Muammar Gaddafi, Uganda’s Idi Amin and other late autocratic rulers. The actor reminisces about happy times with them to the soundtrack of Mary Hopkin’s Those Were the Days.

“We’ve noted with concern the political reaction emanating out of Zimbabwe, including perceived threats against management, staff and customers of our outlets,” the fast food chain noted in a statement. The video, which reportedly cost up to US $370,000, was broadcast across the continent through satellite channels, and recently went global scoring thousands of hits on YouTube.

“We condemn such adverts because it reduces our president to be someone without values,” Jimmy Kunaka, who heads a Mugabe loyalist group Chipangano, told BBC.