State considers reverting to direct polls, court raps it for taking away right to recall sarpanch 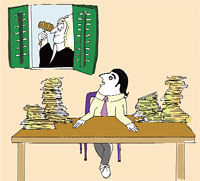 TO BRING in transparency at the panchayat level, Punjab is planning to reintroduce direct election, in which village residents choose their sarpanch. The state had switched to indirect election in 2008. Under the system elected panchayat members chose a sarpanch among themselves.

Indirect election makes it easy to remove a sarpanch because it requires only two-thirds of the elected panchayat members to move a no-confidence motion in the panchayat against their head. In case of direct election two-thirds of the voters in a village will have to agree to move the motion. As a result the year 2010 saw 121 cases filed in the Punjab and Haryana High Court challenging no-confidence motions.

Indirect elections have led to excessive litigation and horse-trading in the panchayat, says Uttam Singh, retired deputy director, Panchayati Raj Department, Punjab. Rather than going back to direct election the state government first issued an ordinance to do away with the no-confidence motion clause in the Punjab Panchayati Raj Act of 1994 in December 2010, and then amended the Act in April this year, arguing that the clause was leading to litigation and factionalism in panchayats.

The consideration to revert to direct election comes in the wake of the Supreme Court rebuking the state authorities for removing the clause from the Act. On May 24, the apex court expressed displeasure over the state amending the Act, stripping the elected panchayat of the power to remove a sarpanch. The court termed it a violation of the basic structure of the Constitution. “It is killing the spirit of democracy. You have created a situation where a sarpanch can never be removed through a no-confidence motion. No-confidence is an inherent right,” it said. It is for the people at the grassroots level to decide, the court added.

When Down To Earth asked Jagpal Singh Sandhu, financial commissioner of the Department of Rural Development and Panchayats, whether the rethink in favour of direct election was prompted by the court’s remarks, he declined to comment but said, “We are yet to finalise the proposal.”

Sarabjit Randhawa, Amritsar district social security officer, says the no-confidence provision was being increasingly used to unseat sarpanchs. The resulting litigations meant all development works at the village-level were at a standstill, he adds.

As per government records, 300 no-confidence motions were moved across the state in 2010, but all were not contested legally. “Since maximum motions were moved between May and June 2010, we wanted to introduce the ordinance with retrospective effect,” says Sandhu.

One of the litigants in 2010 was Sukhbir Kaur, sarpanch of Virama village in Amritsar, who was restored to her post because of majority support. “Earlier, politicians could turn elected panchayat members against sarpanchs, and remove them using a no-confidence motion. But with the amendment it could no longer be done,” she says. The motion halted development in villages, she adds, citing examples of three villages close to Virama where development works are pending for the past three years.

Sandhu says the Punjab and Haryana High Court combined the 121 litigations into one and passed a ruling in May this year that sarpanchs cannot be removed after the Act had been amended. However, it noted that those who had already been removed would not be reinstated.

The state challenged the high court’s decision of not implementing the amended law with retrospective effect in the Supreme Court. The apex court did not entertain the state’s appeal, saying removing no-confidence motion “is a legislative perversion”.

G S Gill, block development officer of Verka in Amritsar district, agrees with the apex court. “If we can remove the prime minister and his government with no-confidence motion, the same should apply to sarpanchs.”

According to P P Balan, deputy director of the Centre for Research in Rural and Industrial Development, Chandigarh, horse-trading and excessive litigation occurred in Punjab as a result of the indirect elections and not no-confidence motion.

George Mathew, director of Institute of Social Sciences in Delhi, says, “No-confidence motion has its limitations. But it is a tool that favours democracy.”