Scientists say a pair of genes are responsible for lending colour to animal furs. 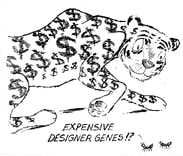 IN RUDYARD Kipling's The Jungle Book, the sagacious elephant reveals to a rapt animal audience the mystery of the black stripes on the body of Sher Khan, the tiger: They were nothing but bramble scratches.

That was Kipling's pigment of imagination. Scientists now believe the designer of colourful patterns on animal skins is a pair of genes that operates through a pair of chemical artists called peptides.

The peptides supposedly stimulate the production of pigments in cells called melanocytes. While one peptide induces the melanocytes to manufacture black and brown pigments, the other is responsible for yellowish-red pigments.

The colouring of human manes and skin is more complex than what is seen in animal furs. Scientists suspect that in humans at least six genes work together, accounting for the vast variation in human pigmentation, which is why when a black person mates with a white person, they do not have 50 per cent white children and 50 per cent black, but offsprings with soft coffee brown skin.

Roger D Cone, a molecular biologist at Oregon Health Sciences University in Portland, is investigating a possible link between the bright red hair seen in some people and the ruddiness of red foxes and chestnut horses.

Scientists have discovered that the genes that code for the shades and patterns of an animal's coat also take part in essential tasks of development, including guiding the cells of an embryo to their proper destination.

The gene that gives rise to the peptide that stimulates the production of dark pigments also yields a host of other highly active peptides, from steroid hormones to the endorphins that act as the body's natural pain-relievers. By exploring the pigmentation pathways, researchers hope to gain insight into such diverse biochemical events as painkilling and sexual development.