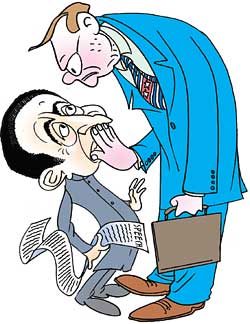 The US steals Kamal Nath's party in Geneva

the trade talks at the World Trade Organization headquarters in Geneva collapsed in the last week of July. The Union minister for Commerce, Kamal Nath, said India would not accede to the demands of developed countries at the cost of Indian farmers. Nath seems to have become a hero in many quarters in the country and in other developing countries--and a villain amongst developed countries for allegedly scuttling free trade negotiations. But in reality, he has virtually complied with all conditions of the wto agriculture text, including almost zero farm subsidy reduction by developed countries. And the talks actually collapsed because the us did not want to make any commitment to cut massive subsidies to cotton growers.

India had three main demands before the commencement of the meet. It wanted reduction in subsidies to farmers in developed countries and increase in the number of special products--items on which developing countries have flexibility to raise import tariff because these items are important for food, livelihood security and rural development. India also wanted a simplified Special Safeguard Mechanism (ssm) that would allow developing countries to raise tariffs to protect farmers from surging imports. But at Geneva, India did not raise the first two issues at all. The issue of ssm was stonewalled by the us.


On the eighth day of the ministerial, the European Union brokered a proposal on ssms. The proposal said that developing countries could hike import duties/ tariffs to any level, if they could prove, in 60 days, that glut in imports or fall in prices of imported goods is inimical to domestic livelihoods, food security and rural development. The draft circulated before the meet talked of limits on hikes in import duties.

Six of the G-7 countries including China and India agreed to the proposal but the us blocked it. us trade representative Susan Schwab said ssms in the present form "were very protective for developing countries and could not be accepted". "This was an excuse because if all countries had agreed to the us proposal, the next issue on the agenda would have been cotton subsidies which the us wanted to evade," said Bhaskar Goswami of the Delhi-based think tank Forum for Biotechnology and Food Security. "In 2007, the us doles out three billion dollars as cotton subsidy. This came down to one billion in 2008 because 38 per cent of land under cotton had been diverted to corn and other bio-fuel crops. At Geneva, the us would have been asked to cut down the subsidy by 70 per cent and that would have created trouble in an election year," Goswami explained.

The us has already lost a wto dispute on cotton subsidies. "In 2003, it was criticized for protecting its 20,000 cotton growers impoverishing millions of cotton growers in the four African countries--Benin, Burkina Faso, Mali and Chad. The impact has been also borne by Indian cotton farmers who were priced out and committed suicide under pressure of heavy loans," said Devinder Sharma who is also affiliated with the same think tank.


Meanwhile, farm movements in India are demanding complete exclusion of agriculture from wto talks. "Developed countries want to protect their agriculture though heavy subsidies and high tariff barriers and at the same time want access for their products in the developing countries. There can be no agreement unless the developed world drastically changes its attitude. So we believe that wto has become ineffective and needs to be wind up," said Krishan Bir Chaudhary, the president of the nationwide farmers' organization Bharat Krishak Samaj.

"Free market will only lead to more suicides. We have to be completely self-reliant in agriculture and food and not accede to the will of multi-national companies," said Chukki Nanjunda swamy of another farmers' organization Karnataka Rajya Raitha Sangha, a farm organization.

The fact that wto director general Pascal Lamy has cut short his autumn break and is visiting India on August 10-12 and the us soon after shows how desperate he is to conclude the Doha Development Round which began in 2001. The talks might restart in September.