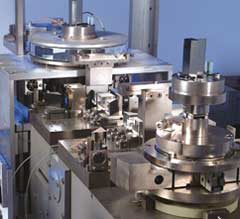 the odds of building a computer based on atomic bytes have increased with two independent research groups in Europe and the us successfully pushing the boundaries of human control over the microscopic world.

In one of the two experiments, bizarre by normal standards, scientists with the us National Institute of Standards and Technology (nist) coaxed six beryllium ions (charged atoms) into spinning together in two opposite directions simultaneously; a so-called Schrdinger cat state that obeys the unusual laws of quantum physics. A "cat state", also called superposition, could be useful in applications such as quantum computing and ultra-sensitive measurement techniques.

A quantum computer would use the exceptional behaviour of tiny particles such as atoms to hold, process and transport vast amounts of information -- all in a fraction of the time a conventional computer would take.

Led by physicist Dietrich Leibfried, the nist researchers "entangled" the six ions, so that their nuclei were all spinning clockwise and counterclockwise simultaneously. Entanglement occurs when the quantum properties of two or more particles are correlated -- that is, if a change occurs in one particle, it will be reflected in other particles. The study was reported in the December 1, 2005 issue of Nature (Vol 438, No 7068).

In the other experiment (published in the same issue of Nature), a team of researchers from Austria's Innsbruck University entangled eight calcium ions using magnetic fields and ultraviolet lasers. This entanglement can be thought of as a quantum byte or "qubyte" that acts much like an 8-bit byte in a conventional computer. But conventional computers are based on a binary system in which each bit can only be set to either 1 or 0. In a quantum computer, on the other hand, the individual qubits can be set to additional states (any state between 0 and 1, for instance 90 per cent of 0 and 10 per cent of 1). As a result, a quantum computer, scientists believe, will be able to work much faster.

Apart from creating the first-ever qubyte, the Austrian scientists led by Hartmut Hffner achieved another feat. Their analysis showed that these entangled states are scalable to many more particles, raising the hope that quantum computers may be possible some day.