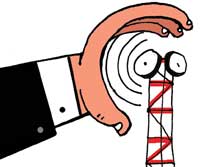 On July 31, Venezuelan regulators revoked the broadcast rights of 34 radio stations, deepening a rift between President Hugo Chavez's government and the private media. Diosdado Cabello, who heads Venezuela's telecommunications regulatory agency, said some of the stations failed to update their registrations, while others held licences granted to an operator who is now deceased.

In recent months, the Venezuelan government has been acccused by watchdog and human rights groups of trying to stifle dissent. But Cabello denied the government aims to limit freedom of expression or punish political opponents by revoking licences.

Romulo Raymondi, director of radio Barlovento 1230 AM, one of the affected stations, told the Associated Press he planned to appeal the order to shut down the station his father opened 45 years ago.

Regulators have also opened a series of investigations that could lead to the shutdown of opposition-aligned Globovision, the only TV channel fiercely critical of Chavez that remains on the open airwaves.