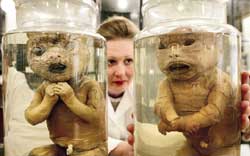 A Russian court has upheld a federal government's decision to dismiss Vitaly Sadovnikov, director of Mayak, the nation's main nuclear waste processing plant in the Ural mountains. Sadovnikov had sanctioned the dumping of millions of cubic metres of liquid radioactive waste into the Techa river in 2001-2004. Though the facility had enough money to treat the waste, Sadovnikov spent the money on maintaining an office and lump payments to himself, the court said. Radiation levels in some areas along the Techa are 1,000 times above safety levels. And deformities among newborns are twice the national average. The picture below shows babies born to a couple who suffered chronic radiation.