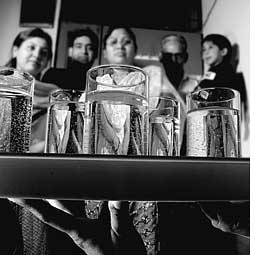 A cause of cancer

HIGH concentrations of radioactive gas radon have been detected in Bengalooru's groundwater, which means a higher risk of stomach cancer for those who drink it.

A team from the Bangalore University and the Baba Atomic Research Centre in Mumbai collected 78 samples of water from borewells, shallow wells, surface water and the supplied drinking water in Bengalooru. More than half the samples contained radon in concentrations up to a thousand times the permissible limit of 11.1 Becquerel per litre.

"Radon in water can cause stomach cancer," said Professor R K Somashekar at the Department of Environmental Studies of the Bangalore University. Records kept by Kidwai Memorial Institute of Oncology on cancer cases in 2001-2003 in Bengalooru also indicate a higher incidence of stomach cancer.

Radon in groundwater is often found in areas with uranium-rich rocks and granite terrain. In the case of Bengalooru it is the large reserves of granite that is causing the problem. Being highly soluble, radon easily dissolves in groundwater. The rate at which radon is released from rocks depends on the porosity of the rocks and the intensity of water flow.

"With extensive quarrying radon can escape into the atmosphere. Fortunately, our survey indicated that radon in the atmosphere is within limits," said Somashekar. Chickpet and Hebbal localities had the highest radon concentration.

The study, the first on radon concentration in groundwater in Bengalooru, found that radon activity increased with depth in most cases.