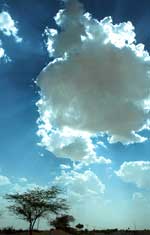 an international team of scientists has devised a model to better predict cloud and rain formation. An improved understanding of clouds is vital to quantify rainfall in short-range weather forecasts. Incidentally, none of the rain forecast models the world over could accurately predict the deluge that flooded Mumbai on July 26.

A cloud consists of billions of droplets (or ice crystals), each as small as 10 micron (one micron is a millionth of a metre). The droplets form when water vapour condenses around a particle of smoke, dust or ash, which is called the condensation nucleus. When the droplets combine with each other, they become heavy and fall as rain or snow. Existing forecasting models assume absence of winds within a cloud. But scientists from, among others, University of Leeds and University College of London (ucl), found evidence of air movement within clouds that, they say, can speed up droplet setting, increasing chances of rain. Their study appeared in the August 9 online edition of Proceedings of the Royal Society.

"As cloud droplets descend through the smallest whirls of turbulence, they speed up, causing them to collide with each other and the drops to grow, eventually getting big enough to fall as rain," says Sat Ghosh, earth and environment researcher with Leeds, who headed the team of researchers.

The team, which included scientists from Spain and the us, showed how pockets of whirling air (tiny eddies) encourage collisions between small and slightly larger droplets within a cloud. The collisions lead to the rapid growth of drops larger than a critical size of 20 microns, when they can fall off as rain.

When checked against earlier measurements taken by aircraft flying through different types of clouds, the model's results were found more accurate than from existing ones, which often underestimate rainfall.

"With this theory it is possible to explain how dust in the atmosphere, for example over urban areas or over deserts, can cause the initiation of very small droplets. This can reduce the average rainfall, but can trigger exceptionally heavy rain in very deep clouds. This may have happened recently in Mumbai,'' said Julian Hunt from ucl 's department of space and climate physics, who was also the former chief executive of the uk Met Office. According to Indian meteorologists, while clouds normally associated with the monsoon are 6-8 kilometres (km) deep, those that led to torrential rain in Mumbai were as much as 15-km deep.

These findings may help better model the rainfall processes. "We have serious problems in simulating rainfall amounts correctly," said M Rajeevan, director at the India Meteorological Department's (imd) Pune centre. But he was quick to add that the findings have to be tested thoroughly first.

In Mumbai, 94.4 centimetre (cm) rain occurred (over 24 hours) in Santa Cruz and 104.5 cm in Vihar Lake. Operational short-range forecast models run by imd and the National Centre for Medium Range Weather Forecasting (ncmrwf), based in New Delhi, could predict only 8-16 cm of rainfall. The computer model at the uk weather office generated a figure of 80 cm, the closest to the actual precipitation. However, this figure was not a forecast but was calculated only after the event had occurred when the weather parameters were fed in.

"We do not yet know the physics of intense precipitation and, therefore, it cannot be modelled," said Rajeevan.

India, unfortunately, is not ready to benefit from these findings. Apart from the fact that only a very few institutions are doing research in cloud physics, India's cloud observation and monitoring infrastructure is sketchy. Various parameters vital to rainfall such as dimensions of cloud and water content, can be estimated with least possible error through Doppler weather radars. "What is required is an umbrella of Doppler weather radars covering the whole of India just like the us has," says Someshwar Das, cloud physicist with ncmrwf. With each covering a radius of 200 km, India would probably require some 40 Doppler weather radars. But it has only four -- in Kolkata, Chennai, Michilipatanam and Sriharikota.

Specialist cameras aboard satellites, too, can spot and forewarn the unusual growth of individual clouds. Ironically, two of the Indian satellites -- insat-2 e and insat-3 a -- equipped with suitable cameras could not be of help because imd did not have the software for deciphering these space imageries. Incidentally, imd failed to forecast the 1999 Orissa Super Cyclone also because of the same reason.