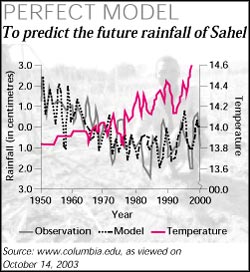 researchers have recently discovered that one of the foremost victims of global warming is Africa's Sahel region. As per their study, the devastating drought that plagued the region in the 1970s and 1980s was caused by an increase in sea surface temperature, and not environmental degradation as was previously implied. Many researchers have suggested that the drought in the semi-arid region was largely due to human land use -- the expansion of farming into marginal areas produced a spiral of changes, including a reduction in vegetation cover. "Land surface factors play an important role in the climate system of Sahel. But they are a consequence, not the cause, of variability in precipitation," says Alessandra Giannini, the lead researcher of the study from the us-based International Research Institute for Climate Prediction.

The researchers tracked sea surface temperatures and precipitation rates from 1930-2000 -- it is for the first time that ocean and climate trends have been studied on a decadal timescale. It was found that the warmer-than-average low latitude waters around Africa favour the establishment of a deep convection over the ocean, which weakens the continental convergence associated with the monsoon. This results in the widespread drought from Senegal to Ethiopia.

If the findings are true, then climatologists can measure ocean temperatures and predict possible negative precipitation trends for the Sahel. This may help the region to take at least some measures to face future adversities.