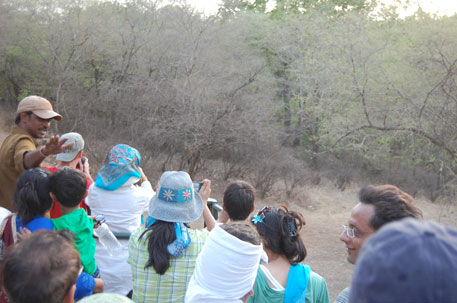 At a time when the Centre is reviewing its guidelines for regulating tourism in and around tiger reserves under the watchful eyes of the Supreme Court, the Rajasthan government has gone ahead and announced its own eco-tourism guidelines. They were finalised on August 27, and ensure that tourism continues with the existing permanent infrastructure not only in the core tiger habitats but also in the areas from where local people have been relocated.

The Union Ministry of Environment and Forests (MoEF) had submitted a set of guidelines on eco-tourism in and around tiger reserves  to the Supreme court in July this year. The court is currently hearing a public interest petition, demanding ban on tourism in the core tiger habitats. The ministry's guidelines prohibited tourism in the areas from where local people have been relocated and called for imposing a 10 per cent conservation cess on the turnover of the hotels and resorts. The court then ordered an interim ban on tourism in the core tiger zones on July 24. This was followed by protests from the tourism industry and a few state governments, including Rasjasthan and Madhya Pradesh. The ministry then backtracked from its position and sought to review its guidelines.

The Court on August 29 allowed the ministry four weeks time to review the guidelines. However, before the court took this decision, Rajasthan formulated its own guidelines. The guidelines say: “Any core area in a Tiger Reserve from which relocation has been carried out will not be used for developing tourism facilities, like hotels, resorts and rest houses, ie no construction will be permitted in such areas, only visitation will be permitted.” The choice of words in this guideline is surprising because permanent structures are in any case are not allowed in core zones of tiger habitats. It is the ongoing tourism activities in these areas that has been causing resentment among the local people who have been asked to move out on the pretext of providing inviolate space for the tigers.

MoEF's July guidelines allowed community-based tourism in 10-20 per cent of core tiger habitats, but said permanent structures in core areas should be completely removed. Rajasthan's guidelines, however, specify that no new tourist facility will be established in protected areas, and that existing tourist facilities will continue to operate. The guidelines go on to state that the conditions of these facilities should, in fact, be improved. The guidelines are also silent on imposing conservation cess on tourist facilities, which the Centre has imposed. They leave it to the tiger-reserve-level local advisory committees to prescribe a benefit-sharing mechanism.

When asked what was the purpose of releasing state guidelines at a time when the Centre is deliberating the national guidelines under the supervision of the Supreme Court, the chief wildlife warden of Rajasthan, Avnish Chaubey, said: “We were already in the process of evolving our own eco-tourism guidelines as per the state's eco-tourism policy of 2010. The guidelines reflect our state's policy. However, if there will be anything contradictory to the court approved Central guidelines, we will make required modifications.”

Rajasthan has two tiger reserves, including Ranthambore, which is one of the most favoured tiger destinations in the country. The state has been aggressively lobbying with the Centre to promote tourism in its reserves. On July 27, after the court imposed an interim ban on tourism in core tiger habitats, the state environment and tourism minister, Bina Kak, wrote a letter to UPA chairperson Sonia Gandhi, asking her to direct the ministry to pursue the case for tourism to be allowed in tiger reserves. “Wildlife tourism today has a significant development and economic value as well it provides employment in remote areas which otherwise cannot be developed intensively because of the restrictions imposed by the Forest Conservation Act and the Wildlife Protection Act,” said the letter.

In this letter Kak showed concern in terms of reduced opportunities for locals due to ban on tourism. But in an earlier letter sent to the UPA chairperson on July 16, Kak had taken a contrary stand by advocating shifting out of 2,306 families from Kailadevi wildlife sanctuary to provide more space for the big cat in Ranthambore tiger reserve. Kailadevi is part of Ranthambore reserve, but the forest in it is not contigious. Kak said the tiger population in Ranthambore was growing due to better management but the forest in it was fragmented due to human presence. She thus demanded Rs 249 crores for relocating the villages from Kailadevi sanctuary and asked Gandhi to advise the environment ministry and Planning Commission to sanction the project.