Rajasthan gets a "Narmada" 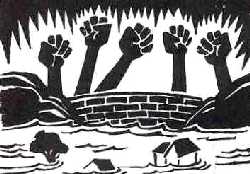 Villagers of Jhadol district in Rajasthan are up in arms against the proposed construction of two dams under the Mansi-Wakal project, which will inundate their villages. In what is already being dubbed the "Narmada of Rajasthan", the Bhil tribals of the area, led by the Chandreshwar Kishan Sangharsh Samiti (CKSS), have pitted themselves against the state government on the issue.

The Rs 84.77-crore Mansi-Wakal project at Ghorana, 60 km west of Udaipur, was launched in 1989 to meet the city's demand for potable water by 2021 AD. Two medium-sized dams will be constructed by the state government on the Mansi and Wakal rivers -- tributaries of the Sabarmati. At least 23 villages in a 4,000-ha area will be submerged, affecting nearly 7,000 people.

Rajiv Khandelwal of Ubeshwar Vikas Mandal, an Udaipur-based voluntary organisation, alleges the villagers were kept in the dark about the project until the foundation stone was laid. He says the project will exploit rural areas to fulfil the water needs of the city when the villagers themselves face severe water shortages. According to Dev Kishan Sharma of CKSS, "The villagers have decided not to accept any government formula for compensation."

The CKSS has filed a writ petition in the Jaipur High Court, demanding a project review. Says Khandelwal, "Studies for the proposed dams revealed certain flaws. While the Wakal dam has been planned for a life span of 25 years, heavy siltation upstream will reduce this." The project report does not specify how the demands for potable water will be met in low rainfall areas, given the annual variations of water flow in the rivers.

Government vehicles are not allowed to enter the area and the issue looks certain to snowball into a crisis.