State ties up with Monsanto, other biotech giants to restructure agriculture 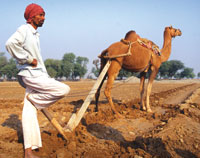 IN AN unprecedented step, Rajasthan has entered into memorandums of understanding (MoUs) with seven biotech seed firms, two of them among the largest in the world, to tone up its agriculture. It signals a fundamental shift in the way farming operates in India by giving private companies access to the state’s research facilities to test and market their hybrid seeds and other technologies.

The agreements cover almost the entire gamut of agricultural crops from maize, mustard, bajra or pearl millet, Rajasthan’s main crop, and vegetables to cotton and forage crops. Going by the memorandums, it means cultivation of everything from cauliflower, hot peppers tomato and watermelon to cereals would willy-nilly shift to hybrids developed by the multinationals and Indian biotech companies. At the same time, the companies have been given the option to license the varieties and hybrids developed by state agriculture universities and the Rajasthan State Seed Corporation (RSSC), and use their facilities to run trial production of private seeds.

Collaborating with the companies are the departments of agriculture and horticulture, three state agriculture universities (SAUs) and RSSC. What is surprising is the speed at which the MoUs have been signed. It was only on June 23 that the government had written to about two dozen biotech seed companies seeking their interest in developing Rajasthan’s agriculture, particularly the seed sector. In less than a month, it had signed the first MoU and the rest came in quick succession.

The significant MoU is the one with Monsanto, which details the crops that the public-private partnership (PPP) will cover and the potential areas of collaboration: research and development (R&D), seed production, processing and extension services to farmers. Although the primary objective, ostensibly, is to help improve agriculture in the state through enhanced yields, the agreement also lays down that the government will “help create an appropriate package of policies, rules and incentives to attract necessary investments from private sector players”.

The other six MoUs merely outline their intent to set up collaborative research programmes with agriculture universities, exchange experts and jointly develop hybrids that will yield better. Two reasons appear to have prompted the state to go for such a radical measure. One, the poor state of research in the agriculture universities that are hamstrung by lack of funds and the disarray in extension services. The other is a plan to turn Rajasthan into a seed production centre that would rival Andhra Pradesh, the country’s seed capital.

It is not surprising that three of the companies that have been roped in so far are based in Hyderabad—as will be a fourth if Bayer BioScience signs up. However, the overwhelming impetus appears to be a letter from the Prime Minister’s Office urging states to enter into partnerships with private seed companies because of their superior technology and dominant market share, a senior official told Down To Earth.

The funds crunch, however, is a real problem. Agricultural Commissioner J C Mohanty explained, “Given paucity of resources, the agriculture universities are restricted in their R&D activity, allowing private seeds companies to have an edge over us. We are just trying to tap resources and use them for the state’s benefit.” It is a theme that finds a ready echo in academia.

A K Gahlot, vice-chancellor of Rajasthan University of Veterinary and Animal Sciences (RAJUVAS) in Bikaner, believes the selected companies “have the best of technologies and the collaboration would give us exposure to these”.

R&D involves a lot of money and the fact is that our universities don’t have enough funds to carry out large-scale research programmes, he added, pointing out that even in Europe R&D is based on PPP. For Gahlot, the rationale is simple. RAJUVAS would collaborate with Monsanto and other companies on technologies for fodder production, its nutritive value assessment, preservation and banking. Since the private sector already has several hybrid seeds, the agriculture universities would test them for their suitability and productivity in Rajasthan’s agro-climatic conditions before releasing them in the market.

Agriculture experts question the haste with which the MoUs were signed and also their contents which, they contend, would have far-reaching consequences for the state’s agriculture.

Among the worrying factors is the near-total emphasis on promoting hybrid seeds. Referring to the undertaking signed with Monsanto, G V Ramanjaneyulu, executive director of the Centre for Sustainable Agriculture, a research organisation in Hyderabad, warned, “This MoU is mainly for identifying suitable high-yielding maize, cotton and vegetable hybrids for rainfed areas of Rajasthan, whereas experience shows hybrids are not suitable for rainfed areas.” The report of the Planning Commission on the suicides by Vidarbha farmers states Bt cotton (genetically modified) hybrids are not suitable for rainfed areas as they are water-guzzling crops, he added.

The MoU with Monsanto, as with the other six companies, repeatedly mentions hybrid in every crop—from cotton to vegetables and cereals. In the case of maize, the MoU states the company would identify the hybrids that would be produced in grower’s fields in suitable locations in Banswara district.

The focus here is on “Monsanto-owned breeding programmes and station to develop high-yielding maize hybrids suitable for rainfed conditions in Rajasthan”.

Monsanto already has a major maize project in the state, Project Golden Rays, in partnership with the Department of Agriculture, where it grows its Dekalb brand corn (maize) in several parts of the state. In 2009, it covered over 30,000 farmers in five tribal districts. Under the scheme, which is borrowed from Gujarat’s Project Sunshine, the state buys the hybrids from the company at a negotiated price and distributes them free to farmers, while Monsanto (India) provides the technical support on the agronomic practices. The project is financed by Rashtriya Krishi Vikas Yojana.

According to the department’s annual report, Project Golden Rays would be expanded in kharif 2010 to “cover approximately 35 per cent of the corn-growing areas in the tribal subplan districts of Banswara, Dungarpur, Udaipur, Pratapgarh and Sirohi to improve the socio-economic conditions of the tribal farmers”. While 3.75 million kg of hybrid seed in five kg mini kits were provided to 750,000 tribal cultivators last year, the amount would be substantially increased this year.

Gyanendra Shukla, director of Monsanto (India), said Project Golden Rays has demonstrated “increased productivity, resulting in increased income per unit land”. Owing to the success in its first year, the scheme is being implemented across large maize-growing areas in the tribal districts of Rajasthan.

This is a sore point with proponents of sustainable agriculture who say hybrids are essentially meant for resource-rich farmers. “In a poor state like Rajasthan using public exchequer to habituate farmers to high-cost seed is a mistake,” pointed out Ramanjaneyulu.

Introducing water- and chemical-guzzling seeds in a state where most of the cultivation depends on rain without a proper environment impact assessment will have serious consequences for farmers, he added (see table: How Rajasthan fares on yields and productivity). This could lead from food crops to non-food commercial crops which will threaten household food security and reduce state food production.

Mohanty, however, insisted there is no focus on hybrids. “We would share our traditional varieties with these seed companies and promote them,” said the agriculture commissioner. “The preliminary agreements don’t deal with hybrid varieties, nor are they on our priority list. We mainly wish to make Rajasthan a seed hub like Andhra Pradesh and compete with private seed companies.”

Maheshwar Prasad Sahu, director of research at Swami Keshwanand Rajasthan Agricultural University in Bikaner, who is one of the signatories to the MoUs, is categorical of development of new varieties and hybrids, new technologies in the area of stress agriculture as well as field-testing of varieties and hybrids of the private companies. 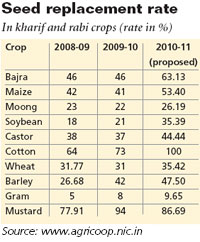 The state has embarked on a massive seed replacement campaign with the outlay for bajra alone budgeted Rs 21 lakh this season. This will cover about 1.1 million small and medium farmers in eight districts (see table: Seed replacement rate). It hopes production of hybrids will increase sharply as a result of the tie-ups. The seed replacement rate of a number of crops (including fodder crops) in Rajasthan is often less than 10 per cent, compared to three and four times this rate in Andhra Pradesh, Gujarat and Maharashtra. “This is why we want to speedily enhance availability of better quality seeds and have opened up to PPP,” said Gahlot.

For RAJUVAS, the nutritional analysis of fodder is important. “With a limited green fodder production period in the state, fodder banking is important. The collaboration would help us develop post-harvest technologies for green fodder and ways to process, preserve and store them,” said its vice- chancellor.

The MoUs also raise the crucial issue of intellectual property rights. Ramanjaneyulu alleged that “the main agenda seems to be a backdoor way to legalise the proprietary rights over seed”. India, he pointed out, does not allow patenting of seeds, yet Monsanto had used private agreements with seed companies to collect an exorbitant royalty of Rs 1,200 on a 450 gm packet of its Bollgard Bt cotton, which was initially priced at Rs 1,800.

While states like Andhra Pradesh, Maharashtra, Gujarat and Madhya Pradesh had challenged this and forced the company to reduce the royalty to Rs 150 and bring the prices down to Rs 600, Rajasthan had allowed the company to maintain the royalty rate. As a result, Bollgard sells at Rs 1,200 a packet in Rajasthan. “The MoU will provide further legal protection for the company’s hybrids,” Ramanjaneyulu warned.

Analysts have also pointed out that public resources like land and infrastructure are being provided to Monsanto to build its business. At a time when state agriculture universities and state seed corporations are starved of funds, the government is willing to loosen its purse strings to support private industry, rued an agriculture activist. It is unacceptable, he said.

Another worry is Monsanto will take up feasibility assessment of activities based on its own standard processes of decision-making, whereas the state and its machinery have not put in any such conditionality. According to Mohanty, these anxieties are premature since “the MoUs are just a preliminary step expressing our intent to work in collaboration with the seed companies”.

They are non-binding on government as well as the universities until we sign specific agreements on a project. None of the companies has so far made a concrete proposal, he said.

Perhaps, the best option for the state would be to allow public scrutiny of the specific proposals made by the companies and kick off a debate on the way forward for Rajasthan’s agriculture. This is vital since the agreements carry huge ecological and economic implications.