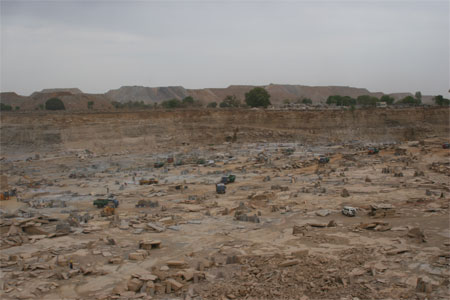 Last year, the mining department of the Rajasthan government amended the rules governing grant of permits to lessees of mines and quarries, which allows them to evade environmental clearance. The new rules allow mine owners to form a cluster association and submit environment management plans (EMPs) to the district authorities, thereby doing away with the need for obtaining clearance from the mandated authorities.

Even as the deadline for submission of EMPs expired on March 31, the state mining department may be in for trouble over its move to relax norms for mining minor minerals. The amended rules appear to be in violation of the environmental law and a high court order; the petitioner in the case has sent legal notice to senior officials of the state mining department for contempt of court.

In June 2012, the Rajasthan government issued a notification amending the Rajasthan Minor Minerals Concession Rules of 1986. The new notification mandated that all mine leaseholders in a cluster, irrespective of the size of their mine, form an association and submit EMPs to the district level monitoring committee, headed by the district collector, for approval.

A cluster is defined as a geographical boundary, not exceeding 50 sq km, comprising mining leases or quarry licences and short-term permit areas. A cluster of mines is declared by the director of the state mining department.

With its recent notification, the Rajasthan government is not only allowing mine holders to evade the EIA procedure, but has also given the authority of approving EMPs to the district collector. This again is a breach of EIA Notification 2006.

“The government is giving such flexibilities to the lessees so that the mine operations which benefit them directly and indirectly do not stop in the state,” says Dinesh Bothra, a freelance journalist in Rajasthan.

What the court said Bothra had filed a public interest petition in the Rajasthan High Court in 2009 when the state government had made a similar move by issuing an advertisement inviting applications for quarry licences for mining sandstone in the Sinhada area of Jodhpur district.

The department of mines of the state government was to allot quarry licences for mining 201.06 ha. This would have required prior environmental clearance from MoEF. However, the department claimed it was allotting 1,117 small quarry licences, each with an area of 0.18 ha, and that these did not come under the provisions of the EIA notification. The mining department claimed that it only needed to seek consent from the state pollution control board. It was alleged that the mining department chose to overlook the fact that the total area allotted was more than 200 ha, and thus managed to circumvent the EIA procedure.

Finally, in the case of Dinesh Bothra vs State of Rajasthan and Others (August 19, 2011), the high court directed the mining department of the state to refrain from allotting any land or execute any mining lease without obtaining the requisite clearance from the concerned committee constituted under the EIA Notification of 2006. The court pointed out that when mining activity is to be undertaken in 201.06 hectares, dividing the area into small sections would not count as mining activity in area less than 50 ha. Further, mining activities in 1,117 quarries was bound to have a cumulative impact on the environment in the area.

The court maintained that in the zeal to collect higher revenue, the environmental concerns cannot be and should not be compromised. It constituted a committee to look into the case and recommend measures. The committee suggested that minimum size of the mine lease should be 5 ha (for minor minerals such as sandstone) and a cluster approach should be used for small mines. The court also instructed the state government and its mining department to ensure that no mining activity takes place in the area without adequate clearance. The respondents were also directed to comply with the mandates of EIA Notification 2006 in future.

In the similar case of Deepak Kumar and others vs State of Haryana and others (February 27, 2012), the court had ruled that leases of minor minerals, including their renewal, for an area of less than 5 ha will be granted by states or Union Territories only after receiving the necessary environmental clearance from MoEF. The Haryana government had proposed to auction minor mineral quarries of areas not exceeding more than 4.5 ha in Panchkula, Ambala and Yamunanagar districts. 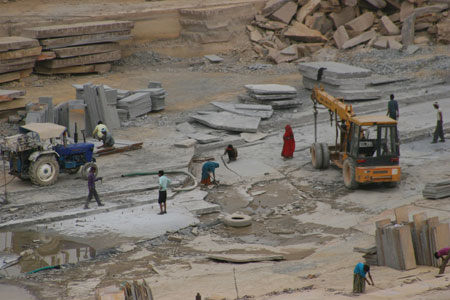 Who will monitor implementation of EMPs?
The EIA process under the EIA notification 2006 would typically take up to a year, during which mining operations would be halted. A public hearing too would have to be conducted for seeking environmental clearance.

The recent notification by the Rajasthan government is controversial as it only requires an EMP to be furnished. An EMP includes details such as the measures that mine holders intend to take to conserve top soil, store and dispose of overburden waste rock, control air pollution, and reclaim and rehabilitate mined land. An EMP would not help ensure proper management of the land to be mined as it does not clearly delegate the responsibility of monitoring all the quarries in the cluster. While the cluster approach for multiple quarries in an area could prove to be a good move to prohibit illegal mining and maintain the ecology of the area, it can only be permitted under law with the appropriate environmental clearance.

Bothra said he has sent legal notices to the secretary and director of the mining department for contempt of court. Officials from the mines department of the Rajasthan government refused to comment on the matter.