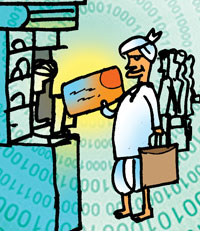 Smart cards will replace paper cards and the subsidised ration bought at fair price shops (FPS) will be recorded online. The smart card will have biometric identification details of the beneficiary like fingerprints and iris scans. A smart card will also record the amount of stock a shop owner receives and disburses. Critics are sceptical.

“Technological interventions will not help unless there is political will to curb corruption,” said Bhaskar Goswami of the Forum for Biotechnology and Food Security, a non-profit in Delhi. “The Central government had sanctioned Rs 6.37 crore for Haryana and Rs 4.6 crore for Chandigarh in November 2008. As a result, 9,600 fair price ration shops and 5.2 million beneficiaries in Haryana will come under the system,” said Navraj Sandhu, Haryana government’s food secretary. The pilot has been launched in Ambala, Sonipat, Gharonda and Sirsa districts.

The government is banking on technology to introduce transparency in PDS. During the launch, the agriculture minister said technologies like GPS (global positioning system), bar-coded ration coupons, digitised ration card database and biometric identification need to be introduced to ensure supplies reach the targeted beneficiaries.

Vice-chairman of the Planning Commission Montek Singh Ahluwalia, who was also present at the launch, said the new system should be able to empower the customer. “Smart cards should allow flexibility to beneficiaries. They should be able to choose the shop from where they want to buy PDS ration,”Ahluwalia said. “An FPS owner must be made to realise that if he does not run his shop properly, he will end up losing customers,” he added. The smart card scheme does not allow for inter-operability between shops as of now. “This is a pilot scheme. First we will monitor its performance and then see if we can upscale it,” said Central food secretary Alka Sirohi.

Nandan Nilekani, chairperson of the Unique Identification Authority of India, said he would like to join hands with the food ministry to reform the PDS by opening online food accounts using the identity number. “We need to apply a replenishment model in PDS like Walmart. The system should be demand led; if ration is taken from an FPS, his stocks should automatically be replenished, rather than depend on a fixed allocation for every FPS,” he said. Food policy experts have their doubts how far technology will be able to make the system accountable. Goswami doubted if smart cards will work in rural and tribal areas.“The shop-owner may swipe the card for 30 kg but give only 10 kg to the beneficiary. The leakage won’t be detectable at all,” he added.