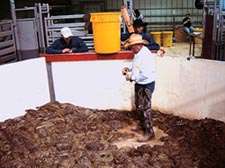 Throughout the second week of March people from the west Texas town of Sweetwater were out with their tongs to catch rattlesnakes. They were preparing to attend the world's largest rattlesnake roundup, organised every year at Sweetwater over the second weekend of March. According to the organisers, the three-day event yielded more than 5,789 kg of meat from around 7,000 snakes in 2006.

The event has, however, raised ecological and ethical hackles, as hunters scour the landscape for snake dens. They pump gas fumes into the dens and snatch the snakes with their tongs. Scientists say the fumes are ecologically harmful. In a recent statement, the American Society of Ichthyologists and Herpetologists has noted that though it is difficult to assess the complications of rattlesnake roundups, they can affect snake populations negatively, and even push local populations towards extinction.

Farmers, however, contend that the roundup helps them control a pest that maims or kills livestock. Besides, nothing is wasted, the organisers say, with the skins made into belts, the meat sold as a delicacy and the venom sold to pharmaceutical companies.

The Sweetwater roundup draws more than 30,000 people from across the US and other countries, generating good tourist revenues for the town.