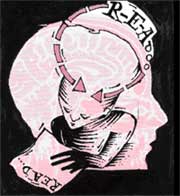 in the last two decades, attention on acquired reading disorders has shifted from neuroanatomical (wherein specific disorders were attributed to specific lesions in the brain) to the general cognitive approach. Now the focus is on the exact manifestation of brain damage, such as visual perception to a more specific task like reading. Contemporary study now proceeds to a categorisation of various types of disorders, by detailing specific reading disorders seperately, with their interconnectivity being worked out.

Reading disorders are then pinpointed to one or the other process, with theoretical models being developed to account for all subtypes. Thus there is, amongst others, 'pure alexia', or letter by letter reading, wherein the patient can read words only by spelling each letter out to himself. Pure alexia is established to be very rare, more so in bilinguals. Then there is 'surface dyslexia', where the patient cannot recognise words directly, but reads by working out each letter-sound relationship. (the irregular word, 'listen' is worked out by reading 'l-i-s-t-e-n,' and then putting it together).

The inability to read similar irregular words is a major criteria in diagnosing surface dyslexia. Surface dyslexia is unlikely to occur in languages that do not have different spellings for a single sound (where you cannot spell 'fone' as 'phone'). Other than a few stories in the Japanese Kangi and Kana writing systems, no analysis on dyslexia has been done so far, in the Asiatic languages, and in bilingual biliterates, an Asian tendency, who present rich ground for unravelling the mystery of how the human brain processes reading in multilinguals.

Pratibha Karanth, professor at the Institute of Speech and Hearing at Bangalore, takes the case of a customs inspection officer, who after a cerebral stroke was found to have pure alexia. Previously, a proficient reader of Kannada, Telegu and English, the person now had difficulty in reading all three. He had to trace each letter, co-join the letters in a word and only then read it. Yet, he found it easier to regain reading in English than in Kannada, a language that he learnt earlier and which should have presented easier reading because the phoneme (letter-sound) and grapheme (script-sound) in Kannada is the same. This was also inspite of the English language's irregular words (hint/mint/and yet 'pint') and lack of phoneme-grapheme correspondence, ('ki'is used both in 'king' and also as 'kai' in 'kite').

Karanth explains this apparent difficulty as being due to the numerous graphemes existing in Kannada that the person had to identify, which he found difficult because he not only had to visually perceive and identify the base consonant but also the vowel graphene that it was in cojuction with, besides the length of the vowel (for instance, it was a long 'ee' or a short one). Karanth has thus categorised verbal alexia (the gentleman found auditory reading or dictation much easier) as disrupting the reader of syllabic scripts like Kannada to a greater extent than alphabetic scripts like English.

Karanth, by her categorisation of dyslexia in bilingual biliterates in the Dravidian languages, in terms of disturbance of specific subcomponents of reading, is seeking to refute western theory that bilinguals store languages in different regions of the brain, with different cortical regions handling each language (National Academy of Sciences, 1995).

On the contrary, what is involved is different reading processes that the brain works out for each language script. When a lesion occurs, it is this process that is affected and not the memory representation in the particular region of the brain.