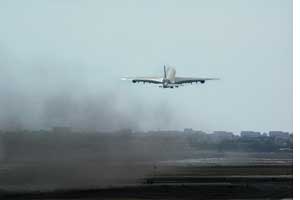 on may 15, the Central government amended the coastal regulations to help the Maharashtra government proceed with the construction of a new airport in Navi Mumbai. The proposed airport, 35 km from the existing Mumbai international airport, is to be built by reclaiming low-lying coastal land and felling 800 ha of mangrove forest.

The Coastal Regulation Zone (crz) notification of 1991 was proving to be a hindrance for the airport project. The site is in an ecologically sensitive zone and a portion of it is in the coastal rural zone--both governed by crz regulations that ban industrial activities.

The Union environment ministry, therefore, amended the coastal law and said the City and Industrial Development Corporation (cidco), the nodal agency for the Rs 10,000 crore-project, could now put up the proposal for airport in the crz areas. It justified the amendment saying it is "necessary and expedient in the public's interest". The ministry said developers would still have to carry out environmental impact assessment and public hearing to get environmental clearance.

The ministry had earlier refused environmental clearance for the project in March 2008 in view of the Bombay High Court's 2005 order that put a freeze on destruction of mangroves in Maharashtra. The ministry had then asked cidco to seek permission from the court for an amendment in the crz rules. Following the ministry's advice, cidco filed a special application before the high court in March seeking permission to move to the Centre to amend the rules. The court gave the permission.

The crz notification has been amended 21 times on previous occasions to make way for projects like the airport at Andaman Nicobar Islands. An amendment was the easy way to speed up the project because the coastal management zone (cmz) rules proposed in place of crz notification has been delayed. cmz would have automatically allowed projects like Navi Mumbai airport in coastal areas (see 'Fishers at bay', Down To Earth, December 31, 2008).