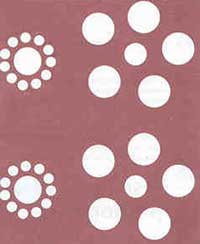 THE world, as we perceive it through our senses, appears to be unitary: the final mental picture we have of the world, at any moment, is synthetic, built up from sensory impressions, received through sight and hearing primarily, as well as smell, touch and taste.

In daily life, we do not have two different impressions of the world at the same time. S Aglioti, J G X DeSouza and M A Goodale of the Universities of Verona and Western Ontario have carried out experiments showing how the hand can recognise reality even when the eye is fooled (Current Biology 5, (6): 679-685).

What is strange is that the information available to the subject is purely visual, but how the subject interprets it depends on whether he or she merely describes what is seen or proceeds to perform a physical action. The experiments involved a common optical illusion known as the Titchener circles, one that we can try out for ourselves. Draw two,iden- tical circles on a piece of paper at some distance from each other. Surround the first circle by a number of smaller circles, and the second one by large circles. If you look at the paper now, the first circle appears to be larger than the second .

The usual explanation for the phenomenon is that the brain )udges the size of a seen object on the basis of a comparison with the nearest available 'standard' in the neighbourhood. Thus, the first circle is judged to be larger than the second even though the two are, in fact, identical.

There is an interesting variant of this iflusion: a circle which is actually larger than another can be made to appear to be of the same size if it is nested within larger circles, whereas the smaller one is in the middle of still smaller circles (see Fig 2). Aglioti and his colleagues set up both illusions, not by drawing circles on paper but by using poker chips (circular discs), varying in diameter from 27 to 33 m. To be judged equal in size, the disc ifi the array of larger circles had to be, on an average, 2.5 mm wider than the disc in the array of smaller circles.

After presenting the two discs (along with their surrounding circles) for three seconds, subjects were told to pick up the one on the left if they thought the two discs to be of the same size, or to pick up the one on the right if they thought otherwise. Which disc a subject chose was an indicator of whether he or she judged them to be identical in size or different.

What the subject did was monitered; the movements of the wrist and fingers were monitored during the act of picking up a disc. Scientists measured the maximum size of the grip and the opening between the index finger and the thumb during grasping. Earlier studies had shown that maximum grip size, typically achieved about 70 per cent of the way through a grasping movement, is proportional to the size of the object that is picked up.

At the perceptual level, the illusion was successful. All subjects treated discs that were physically different in size as perceptually equivalent, and discs that were physically identical were judged to be perceptually different. Remarkably, these illusory perceptions did not affect the manner in which the subjects scaled their grasp. On the contrary, the maximum grip size was larger than average in the case of discs whose true size was larger than average, and correspondingly, smaller than average when the true size was smaller.

What do the observations imply? That the control of a skilled movement (such as grasping) is dependent on perceptual information. At the same time, the results of these experiments indicate that the brain is capable of making distinct judgements about the external world depending on whether or not it has to act on the basis of the judgements. The kinds of computations performed by the brain before the performance of skilled motor actions differ from those computations that lead to the making of perceptual judgements about the world. Such a disjunction between visual perception and visual control of skilled motor acts has also been observed in patients with brain damage.