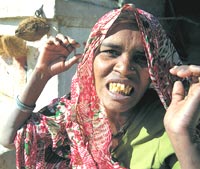 a research by Hyderabad-based National Institute of Nutrition (nin) could alleviate the suffering of about 62 million Indians, who are consuming unhealthy quantities of fluoride. According to a study, Effect of tamarind ingestion on fluoride excretion in humans, intake of tamarind via food delays the progression of fluorosis by enhancing urinary excretion of fluoride in humans. The study is a continuation of an earlier study conducted on dogs, which showed beneficial effect of tamarind ingestion by way of increased urinary excretion and decreased retention in bones.

The present study has been carried out on a group of 18 boys randomly selected from social welfare hostels in two districts of Andhra Pradesh -- Nalgonda and Rangareddy. Fluoride levels in the drinking water were found to be 3.7 parts per million (ppm) in Nelpatla village of Nalgonda, and 3.9 ppm in the Batasingaram village of Rangareddy. The whole experiment was conducted in two stages each of 18 days duration. During the first stage, students were given a rice and pulse-based diet without tamarind. In the second stage, they received tamarind paste (10 grammes every day per student) in addition to rice and pulse-based food. During the last three days of each regimen, urine samples of 24 hours were collected for biochemical analysis. The results showed that there was a significant increase in urinary excretion of fluoride during the period of tamarind ingestion. The fluoride excretion was 4.80.22 milligrammes per day (mg/d) while tamarind supplements were being given, and 3.50.22 mg/d during the control period.

"We are still not very clear how tamarind helps, but our hypothesis is that in acidic ph conditions (low levels of ph), fluoride is absorbed in the body due to formation of non-ionic hydrogen fluoride. But an alkaline ph (high levels) restricts the absorption. Tamarind increases the ph (as was seen in the urine of the subjects), thus making it alkaline," says A L Khandare, who heads the research team at nin.