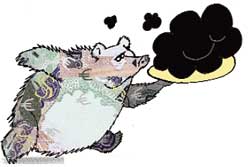 COMPANIES in India that hoped to profit by investing in technologies that minimize carbon emissions are holding on to their carbon credits. The value of these credits or certified emission reduction units (cers) has fallen steeply world over.

In EU, for instance, the price of one cer has fallen from 31 to nine between January and now. Carbon credits, created by carbon emission reduction, are sold by companies in developing countries to those in developed countries. Each cer is worth one tonne reduced carbon emission and can be traded in the international market under a UN mandate.

It is the European countries that usually buy carbon credits as they need to cut carbon emissions eight per cent below 1990 levels by 2012 under the international climate treaty, Kyoto Protocol. But the Indian companies are not selling. They are sitting on 63 million cers as the market is bearish. "The prices are low because of recession. But the situation is not alarming. One should worry if the price falls below eight," said Pamposh Bhatt, a director with gtz German Technical Cooperation, an international development agency. Archak Pattnaik of tuv-nord, an international company that certifies cdm ( clean development mechanism, to minimize carbon emissions) projects, also said the fall in prices is a "temporary phenomenon".

But those dealing in cdm projects said market forces, not governments, should determine cer prices. Bhatt said cer demand might increase if more countries commit themselves to carbon emission reductions under Kyoto protocol. "But if prices continue to fall, industrialized countries will need to ensure efforts and resources of so many countries that went into nurturing the carbon market over the past 10 years do not go waste," Bhatt said.