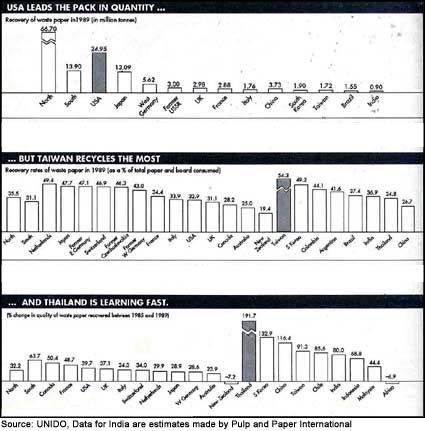 BY THE end of the 1980s, 37 per cent of the paper and board consumed by the world was being collected and recycled to make more paper and board. While in the North it was environmental consciousness that brought about this recycling, in the South, poverty was the determining factor.

Now, however, environmental legislation has created a glut in the waste paper trade and, as a result, change is in store for the paper and board industry worldwide. For example, US waste shippers will no longer have any incentive to ship wastes to South Korea, Taiwan, Japan or Thailand, where waste paper is used in large quantities. And, newsprint manufacturers will have to start locating their mills nearer to waste paper collection centres.

... but taiwan recycles the most : Data on recovery rates of waste paper in 1989 clearly show that large countries like USA and even traditional recycling societies like India and China still have a long way to go.

... and thailand is learning fast : South Korea, Taiwan and Thailand process large quantities of waste paper, which they import from countries such as USA.