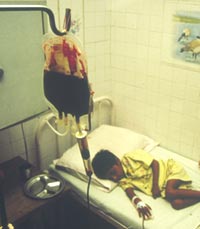 During the first study of its kind, researchers discovered that a chemical leaching out of bags storing donated blood poses acute health hazards for patients who need frequent transfusions. The findings have wide-reaching implications, as blood banks across the world store blood in polyvinyl chloride (PVC) bags, made with the chemical called DEHP. The manufacturers of PVC favour DEHP since it cheap. Publicly, they justify the usage by asserting that DEHP has low solubility risk and does not lead to haemolysis (damage to red blood cells). But the former claim is erroneous, shows the study conducted by P A Kurup and his colleagues from the biology department of Terumo Penpol Limited, a Thiruvananthapuram-based organisation. As per their findings, substantial amount of DEHP can dissolve in the blood.

They found that rats continually exposed to the chemical developed degenerative changes in their brain. DEHP also inhibited the production of a enzyme called na-k-atpase in the liver, brain and red blood cells of the rats. A decrease in the level of this enzyme is associated with neurological disorders and heart diseases.

The findings provide impetus to replace DEHP-based bags. Alternatives are available -- bags made of butryl n-trihexyl citrate; but they are expensive.