'Tagged' viruses can warn us of an impending epidemic 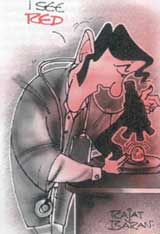 MICROSCOPIC glass beads wrapped in artificial cell membranes have been made to glow red in the presence of cholera. Chemists in New Mexico, USA, say detectors with the beads can 'sniff' out cholera bugs in hospitals and disaster zones before people fall ill - and that the technology could also warn nations of an impending biological weapons attack.

As the threat of bioterrorism grows, researchers are focusing on ways to spot dangerous microorganisms like anthrax or cholera bacteria in the field before epidemics wreak havoc. This research, needless to say, has been a boon for medicine as well. Approaches based on deoxyribosenucleic acid (DNA) sequencing are slow and insensitive, and chemicals used in antibody tests have limited shelf life.

To start an infection, bacteria and viruses must grab a receptor molecule in the cell's surface. Cholera bacterium, for instance, secretes a toxin that snags a polysaccharide, a sugar molecule, linked to one of the lipids in cell membranes. Basil Swason and colleagues at the Los Alamos National Laboratory in New Mexico, USA, attached red and blue fluorescent dyes, called fluorophores, to the portion of the cholera toxin receptor buried inside the membrane. Then they embedded the modified receptors in an artificial cell membrane coating a glass bead. The membrane is partially liquid in character, so the receptors float freely on the surface of the bead.

Blue laser light causes the blue fluorophore to emit light of slightly redder wavelength. if red and blue fluorophores come together, the fluorescence from the blue dye stimulates the red dye to emit red light. Despite their continuous motion, the fluorophores rarely meet. Swason says, "There are so few, they don't see each other normally." However, if a molecule of cholera enters the detector and binds to a receptor, it herds lots of receptors from around the membrane into a cluster. This brings the blue and red fluorophores close together, and the membrane glows red. The detector can be adapted practically for any pathogen. Swason and his team are now working on 'tagging' the shiga toxin, secreted by a rather vengeful version of Escherichia coli (journal of the American Chemical Society, Vol 120, p 11, 515).